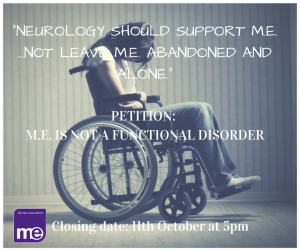 The FINAL TOTAL for the petition was 13,593! Thank you to everyone who added their name and left comments. We’ll now collate the responses and Dr Shepherd will hand the results to Sir Andrew Dillon at NICE.

The ME Association has today launched a new petition against NICE and its proposed new guideline on suspected neurological conditions: M.E. is not a functional disorder.

The new guideline is intended to inform all GPs and medical professionals how and who they should refer to neurology for specialist care. It is vital that we try and ensure the information it contains is accurate and does not exclude people with M.E. from having access to this medical discipline.

Overall, the new guideline is attempting to reduce the number of referrals to neurology by transferring them elsewhere, and it could leave people with M.E. abandoned by a discipline that should be welcoming them.

Our petition follows the submission recently made by Forward ME and is in complete support of their demands.

The suspected neurological conditions guideline specifically refers to M.E./CFS as a ‘functional’ disorder, which it defines as being ‘driven by emotion’ that, ‘may mimic physical disease’.

Despite NICE claiming its guidelines are based on sound research evidence, no such evidence exists or has been presented by the guideline development group to support the notion that M.E./CFS is a functional disorder.

Forward ME – of which the ME Association is a member – has called for all such references to be removed.

M.E. and CFS have long been recognised as neurological disorders by the World Health Organisation and this distinction has been confirmed many times by the Department of Health and UK Government, most recently back in July by Lord O’Shaughnessey in a debate with the Countess of Mar and Lord Hunt:

“Regarding the classification of chronic fatigue syndrome and myalgic encephalomyelitis, or CFS/ME, the Government accept the World Health Organization’s classification of the illness as a neurological condition of unknown origin.”

The NICE guideline for M.E./CFS makes no mention of this disease being considered a functional disorder, or that it is considered to be caused by emotions, and we will do our very best to ensure that this remains the case while the guideline is reviewed and updated.

It was interesting to note, when documents relating to the ongoing guideline review process were released, that:

‘The Association of British Neurologists also takes an interest in [M.E./CFS] as one that is common, disabling and distressing and involves abnormal nervous system functioning.’

This comment seems rather at odds with what has been written about M.E./CFS in the proposed guideline on suspected neurological disorders.

We want to give everyone the opportunity to demand that NICE remove all reference to M.E./CFS from the new guideline on suspected neurological disorders, and to claims that M.E./CFS is a ‘functional’ disorder.

We believe that neurology should not be trying to reduce access to its’ medical experts, but should be welcoming and supporting people with this disease. We need help, not disdain.

We need neurology to:

Please sign the petition and help us demonstrate to NICE that once again, we are not prepared to stand by while others make decisions about our healthcare without proper consideration and respect.

We will aim to close the petition on Wednesday, 11 October at 5pm.