There is a new guideline being considered by NICE (National Institute for Health and Care Excellence) that has a direct bearing on M.E. and Fibromyalgia.

The Suspected Neurological Conditions guideline attempts to set out the initial symptoms and signs that might indicate a neurological condition, and the circumstances under which it is considered advisable to make a referral to neurological services:

This guideline covers the initial assessment of symptoms and signs that might indicate a neurological condition.

It helps non-specialist healthcare professionals to identify people who should be offered referral for specialist investigation. The guideline has separate sections for adults (over 16) and children (under 16).’

Who is it for?

Overview and ME Association position

The consultation is now at the stage where stakeholders must submit comments against the current draft before 19 September.

Forward ME – the collaboration of ME/CFS representatives that includes the ME Association – has now provided its own submission and made it available on its website.

The new guideline should be a useful resource for patients just as much as it is for healthcare professionals, but there are some significant concerns for people with M.E./chronic fatigue syndrome and fibromyalgia.

Perhaps the first thing to note is that ME/CFS and fibromyalgia are the only conditions named in the guideline (aside from anxiety and depression).

Second, and of more concern, is that they are both erroneously conflated with ‘functional’ syndromes, illnesses or disorders.

And third, that people with these conditions are not recommended to be referred to neurology for specialist care.

Overall, the new guideline is attempting to reduce the number of referrals to neurology services. 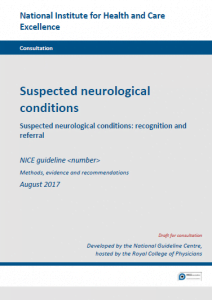 It will leave people with M.E. abandoned by a discipline that should be welcoming them and must surely be of concern to anyone presenting with symptoms or signs that are felt to be neurological in origin.

There is also an assumption that the NICE guideline for ME/CFS is fit for purpose. The recommendation is that people with M.E. should only be referred to neurology in extreme circumstances, and that ME/CFS guideline recommendations should suffice.

For people with fibromyalgia – also considered in this new guideline to be a functional syndrome or illness – as well as psychological support, they are recommended to be referred to pain clinics.

The ME Association has called into question the validity of the current NICE guideline for ME/CFS and a petition signed by over 15,000 people has been sent to Sir Andrew Dillon, the NICE chief executive. We certainly do not agree that it is fit for purpose and have demanded a complete review.

It is vitally important that this new guideline does not conflate ME/CFS with functional illness but recognises it as a neurological disease in accordance with the World Health Organisation, Department of Health and UK Government.

This is very much the position taken by Forward ME as stakeholders in the new guideline consultation process, and the ME Association fully supports their submission (see below).

M.E. and chronic fatigue syndrome are mentioned a total of nine times in the full draft guideline and almost always in the context of functional illness. We have highlighted the main occurrences below:

You can read the submission on the Forward ME website, but it is reproduced in full below:

Forward-ME is a collaboration of ME/CFS charity and voluntary organisation representatives, and is chaired by the Countess of Mar. It exists to improve recognition, understanding, research, management, support and information for everyone whose life is affected by ME and CFS.