The following story has been written by a mother and daughter, and it’s about their recent experience at a PIP tribunal. ‘Amy’ is not the daughter’s real name, and her experience may not be typical.

The ME Association provides a very useful guide to help people with M.E. apply for personal independence payment, and we are currently working on a new guide to the appeal process.

If you are unsuccessful in your attempt at obtaining this non-means-tested benefit, and you believe the decision is unfair, then we would suggest asking for a mandatory reconsideration.

And if that proves unsatisfactory, we would recommend you appeal.

My daughter Amy is 19 and has had M.E. for six years now. The illness kept her almost completely bedbound and extremely isolated for the first three years. 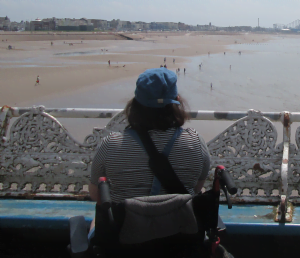 More recently, it has been a time of gradual recovery and a return to education on a very part-time basis.

Amy worries a great deal about how she will be judged in the future, given that she has missed so much education and isn’t able to work or study full-time.

Apart from us feeling that she deserved this support, Amy wanted it to be on record that she is disabled by her M.E. and “not just a skiver”.

So, when her latest application for personal independence payment and the mandatory reconsideration were rejected, we went to tribunal…

The tribunal panel comprised a judge, a doctor and another woman. There was nobody present from the department of work and pensions (DWP).

Amy was understandably anxious but we reassured her that as her appointed representative, I would be speaking for her. However, the judge did not agree.

He said it was very odd that I should be her appointee since she was over 18 and has no learning difficulties, and she would have to speak for herself.

They proceeded to grill Amy for the next hour and 15 minutes, until she broke down.

They plucked sentences out of context. She had written things on Facebook about her progress, and we had provided a print-out of some of these as evidence, but they kept using a particular example against her:

“You said back in May ‘I’m better now’ – what did you mean by that?” I showed Amy the Facebook post she’d written, and she explained, “In the previous paragraph, I wrote about what it’s like to be bedbound. Then the next paragraph starts, ‘I’m better now,’ meaning that I’m no longer bedbound.”

They went back to this point several times: “But you’ve said you’re better now.” Each time, Amy calmly repeated her truth: “I said I’m better than when I was bedbound.”

They asked about her occasional collapses, and whether this ever happens outside of the house.

She described the time in March when she’d gone with friends to a pub but suddenly felt unwell with her legs buckling under her. She’d waited, sitting outside on the pavement in the rain and very upset, for us to arrive.

The judge said, “Oh but that was back in March, and presumably you’re getting better all the time and that won’t happen again.” She said that it had made her afraid to go out again for quite a long time.

The panel seemed throughout their questioning to doubt that she has cognitive difficulties, because she is very articulate.

They asked her what grade she’d earned in the Higher she’d done last year, and as it was a high grade, they said something like, “Well, there you are.”

The reality of what it took for her to achieve that grade seemed irrelevant, and they were uninterested when she began to explain to them why she hasn’t yet been well enough to study English, and how much effort her current (part-time) course requires.

They seemed not to accept that she couldn’t do more for herself at home.

She had to spell out repeatedly that she only has a small amount of energy, and if she did more at home she wouldn’t be able to get out of the house, or pursue her education, which would have a very detrimental effect.

Amy has a number of private therapies, and one private prescription, that help her manage her M.E..

Whereas her GP felt that I spend at least 3 ½ hours a week organising these things, the panel only considered the one NHS prescription to be a basis of measurement.

So, all the other therapies and supplements that help Amy’s M.E. were not considered relevant.

Amy answered their questions calmly, politely and coherently for over an hour. But she was losing focus, and struggling to remember and formulate her thoughts, until finally she just couldn’t continue. They granted a short break.

Outside in the waiting room, she was extremely upset, crying and saying she couldn’t face going back in. The judge consented to finish the hearing with only my testimony.

They asked me about help she needs with bathing. I described our evening routine. The judge asked me, “Has any professional ever suggested to you ‘Just let her get on with it, she’ll be fine?’” I said never.

I said if she didn’t have help and prompting, she would be up for ages because she is so exhausted in the evenings, and she would probably fall asleep unwashed and in her clothes.

We felt very distressed by what she’d been through.

We had told her beforehand that the tribunal had a duty to be impartial and fair. However, our experience was that the panel was operating from a “guilty until proven innocent” standpoint.

Amy said: “I felt as if I were on trial for benefit fraud, rather than having my needs fairly assessed.”

When I spoke with Russell at the ME Association, we were convinced the tribunal would uphold the DWP’s decision and we would be unsuccessful in our attempt.

We felt so let down. It had been such a hard experience. How could it possibly be fair?

Incredibly, the tribunal decided in her favour, and Amy was awarded points for daily living!

She now has a letter from the magistrate stating that her M.E. significantly affects her daily life.

Amy went to appeal so that the reality of her disability would be believed, but the panel members appeared to display the same ignorance and disbelief of M.E., and of disability in general, as so many others do in our society.

Not a fair way to assess credibility

The members of the panel at my daughter’s tribunal did not behave in a way that did them credit. Grilling someone to the extent that they break down and become extremely upset, is not a fair way to assess credibility.

Getting help with benefits and social care

If you are making an application for personal independence payment (PIP) and would like some helpful advice, then why not order our latest guide from the online shop?

We also provide a range of useful leaflets relating to benefits and social care, including blue badge applications and carer’s allowance.