Frieda Hughes: ‘I genuinely believed I was adopted until I was 14’

Having famous parents is not without its downsides. For every path it opens up, it inevitably brings with it almost endless comparisons between the two generations.

Frieda Hughes knows this better than most. The 57-year-old daughter of the poets Ted Hughes and Sylvia Plath lived in the shadow of the family name for so long, it almost threatened to engulf her.

The fact that neither parent is still alive has hardly reduced the public fascination with them; new light is ever being shed on their tumultuous and doomed relationship.

She was not entirely well at the time, however: suffering from chronic fatigue, she was awake just four hours a day, during which she worked in 20-minute stretches. She credits the lack of time the illness left her to accomplish anything with helping focus her mind. 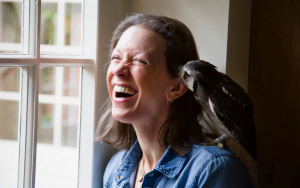 “What was I going to do with four hours a day?” she says. “Not do the things that mattered most because somebody I didn’t know might compare me to my parents? Or do the things I felt made me function more as myself? It was a bit like uncorking a bottle really, and I think that actually helped me. You could argue it was therapeutic.”

But if she felt she was being coerced into doing something she didn’t want to, she would pass out.

“My whole brain would shut down. Chronic fatigue is non-negotiable. I used to think it was a joke until I had it. I had all the blood tests and it showed it was myalgic encephalomyelitis (ME). The doctor said: ‘There’s no cure – you’ve got it for life’. If I get too stressed now, I might have a relapse, so I tend to watch what I do.”

She was in her mid-20s when the illness first struck, but so fearful was she of provoking pity, she kept it to herself for many years. In her mid-30s, she broke up with her then partner because the illness had put the relationship under so much strain. When she met her last husband, two years later, she was still suffering from it, but gradually recovered – a healing process helped by her work.

“If I’d just given up, I believe I’d still be suffering,” she says. “The mind has a huge part to play. I’m not saying you can cure yourself by thinking yourself well, but certainly finding out what made me worse and what made me better helped. What made me better was a sense of achievement. I’ve been accused of being a workaholic. Well, if you take away a workaholic’s work, what happens to them? They fall over.”

You can read the full article about Frieda Hughes, in The Telegraph.