The Countess of Mar was once again defending people with ME/CFS in the House of Lords yesterday, this time in a debate about medically unexplained symptoms (MUS).

The transcript, below, can be read in situ from the website, TheyWorkForYou. You should note that I am only reporting here on the section of the debate that featured ME/CFS, and not in its entirety.

The debate followed the publication in February of a report by the joint commission for mental health on medically unexplained symptoms, and it was in this report that ME/CFS was mentioned by way of an example. 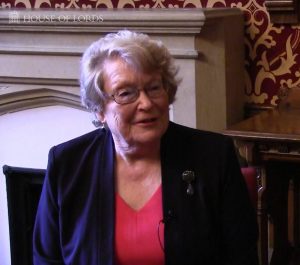 Lady Mar (pictured) raised a number of important issues, and again received confirmation from the Government that ME/CFS was recognised as a neurological condition in accordance with WHO classification, but as a disease with unknown origin.

She was not happy to learn that ME/CFS had been listed as a medically unexplained condition by some clinicians when no specific definition for MUS appeared to exist.

She said that in some instances the treatments were wrong, short-lived and potentially damaging to health, and that the PACE trial – which appears to have underwritten CBT and GET – had now been discredited.

In his reply, Lord O’Shaughnessey, The Under-Secretary for Health, said that it is for clinicians to determine how best to treat people with ME/CFS and that they should be guided by the best available evidence and by the NICE clinical guideline. He confirmed that the guideline for CFS/ME was under review but reiterated that as far as the Government was concerned, ME/CFS will continue to be regarded as a neurological disease.

Lord Hunt (pictured) echoed Lady Mar’s concerns about CBT and GET but also raised the recent BBC Radio 4 investigation into child protection, and the fact that parents can find themselves referred to social services if these treatments are judged by them to be detrimental to their child’s health.

He asked if the Government might give stronger instruction to clinical commissioning groups to ensure they respect the rights of parents in these circumstances.

Lord O’Shaughnessey replied that he would write to the joint panel to ensure they are conversant with the guideline – though he seems to have stopped short from committing himself to investigating the specific issues of child protection raised by the radio programme.

My note: According to the NICE guideline on CFS/ME, “Healthcare professionals should be aware that – like all people receiving care in the NHS – people with CFS/ME have the right to refuse or withdraw from any component of their care plan without this affecting other aspects of their care, or future choices about care.” I wonder if the same applies to parents of children who decide not to continue with what has been determined to be recommended treatment? There’s no separate guideline for young people, so I presume it must.

Baroness Jolly then managed to confuse the issue of MUS and ME/CFS once again by seemingly throwing it all together as a ‘mental health’ issue, asking about the commissioning of mental health services and training.

I thought I was in danger of losing the plot, but then Lord O’Shaughnessey cited the prevalence for ME/CFS and commented it that it was a relatively common disease.

So whether we’re talking about ME/CFS coming under mental health and MUS for the purposes of this new initiative, but remaining under WHO as a neurological disease – for some other hidden, and not yet revealed, purpose – I really am none the wiser.

The comments from the Bishop of Albans inadvertently threw some light on it all when he said that the report was attempting to bring physical and mental health care together  – ‘integrated care’ as he called it. Though I was bemused by his reference to spirituality.

Lord O’Shaughnessey ended this section of the debate by saying,

“There are obviously physical aspects—that is the whole point of this being a neurological condition—as well as mental health aspects in terms of dealing with it. No doubt, spiritual guidance and uplift can help those dealing with these awful conditions.”

Of course people with ME/CFS will rightly clamour, ‘but where’s the physical care?’, however this argument seems to fly over the heads of those representing the department of health at least for the time being, and until perhaps bigger and better biomedical research can bring them around – or they can be made to see just how ineffective CBT and GET are for people with this disease.