A paper written by two psychiatrists in 1970 has influenced medical, public and media perceptions of ME as an illness for decades. For ME Awareness Week, SARAH STAPLES argues it’s a story that every patient with ME needs to know – and share.

It would almost be funny if its effects hadn’t been so tragic. And after all, who would believe it? A disease defined by a flawed 40-year-old study – where no patients were interviewed and which concluded that ME was mass hysteria because many of those affected were women.

But that’s ME. And it’s not funny. Because ask anyone – male or female – who has it and they’ll tell you their own horror story of the day a doctor told them to go home, take an aspirin and rest. Or the time a taxi driver taking them to college ‘joked’ it was only a short walk and they were lazy.

Both these stories, incidentally, are true – and recent. And both, perhaps, can trace their origins in part to that same research paper – and the misconceptions that spread from it down the years like Chinese whispers. So let’s begin our history of ME on January 3, 1970.

It’s not a date that will stand out of the history books. The next day, The Beatles will record their last session, giving it some kudos. But Jan 3 passes largely unnoticed. But it’s on this day that The British Medical Journal prints a paper called Royal Free Epidemic of 1955: A Reconsideration.

In some ways, the outbreak at The Royal Free is ME’s Zero Hour. Over a period of four months, from July to November, 292 members of the medical and administrative staff working at the Royal Free Hospital in London were struck down by a mystery illness – with 255 admitted to hospital.

It made newspaper headlines. It baffled doctors. Its wide-ranging symptoms – muscle weakness and pain, extreme tiredness, headache, even vertigo – left them scratching their heads. Some suspected it was polio-type illness. But all blood tests came back negative.

Science – medicine – drew a blank. But no-one disputed that what the patients had suffered was a real and physical illness, bringing misery riding on its coattails. Some patients recovered, but many would never feel well – never work again. For a while, it was known as The Royal Free Disease. A year later, when the outbreak was written up in The Lancet, it got a name, the name we know it by today: Myalgic Encephalomyelitis.

Fast forward some 14 years later. The Sixties are about swung out and two well-respected psychiatrists, Lancashire-born Colin McEvedy (pictured left) and Bill Beard approached the Royal Free and asked to examine the medical notes written by doctors who had been on the front line of this medical mystery.

Among those doctors unsure about this move was Dr Melvin Ramsay, the specialist in infectious diseases who  looked after the patients during the Royal Free outbreak in 1955 and the man who would go on to help found the ME Association.

“There was disquiet at the time that those notes would be given to McEvedy and Beard,” says Dr Charles Shepherd, now the charity’s medical adviser. “One thing Melvin would always say was that it should never have been done, it should have been opposed more strongly”.

Hindsight is a wonderful thing. McEvedy and Beard’s work was to centre purely on those notes. They did not interview patients who had fallen ill during the outbreak. They did not track down and speak to those who were still suffering – as we now know many were. Instead, A Reconsideration is not a thorough scientific investigation, but a prod of the dying embers.

“…there is little evidence of organic disease affecting the central nervous system…” they write in their summary: “and epidemic hysteria is a much more likely explanation…The data which support this hypothesis are the high attack rate in females compared with males”

Factory girls, girls’ schools, convents, they say later, are all environments where the female population is segregated are prone to these hysterical outbursts. “It is surely” they add, “difficult to associate this epidemic with an infective agent.”

The seventies might have been the era of bra-burning feminism, but McEvedy and Beard’s conclusion that the outbreak was hysterical in origin because of the “high attack rate in females compared with males” is more than 2000 years old.

The ancient Greeks believed a woman’s uterus was a living creature, wandering through her body and causing disease and neuroses. Even the word hysteria comes from this idea. It’s an attitude that has more holes in it than a colander.

But their four page report would stick like a piece of chewing gum on the sole of a shoe, influencing what the newspapers wrote in the 80s when stories of Yuppie ‘Flu appeared on newsstands, how patients were treated by their GP and what the man on the street thought.

ONE FOR THE BIN?

“One of the major criticisms of the way McEvedy and Beard is that they didn’t speak to any of the patients involved. This was purely an analysis of medical notes,” says Dr Shepherd. “Thankfully, their work doesn’t have as much impact now as it once did, and it’s largely regarded as an item for the historical dustbin.”

But there’s no doubt, he says, that their paper influenced a generation of doctors.

“I was a medical student at the Middlesex Hospital at the time the McEvedy and Beard paper came out.Ironically, I was doing my student psychiatry at the time. Of course, the thinking was that ME didn’t exist and that it was mass hysteria. So it had a major impact on those doing medical studies at that time – and also had the effect of stifling research.

“People who wanted to do research in this area were often dissuaded from doing it because they were told ME wasn’t a physical illness, it was psychological. That mud stuck for a long, long time.”

What if those researchers hadn’t been steered away? If they had investigated more thoroughly, they might have found that there had been other outbreaks not just nationally, but globally.

Even before the Royal Free, pockets of a similar illness had flared up in north London months earlier. A year later, in Dalston, Cumbria, a worried local GP catalogued an illness that affected 233 of his patients in a small rural area – many of them children – with a male/female ratio of 1-1.

There were outbreaks of what is believed to be ME in Los Angeles, Iceland, Switzerland. Australia.  “We still don’t know what infection caused these outbreaks,” says Dr Shepherd. “Although they are rare now they’re absolutely not unheard of.”

So was the Royal Free really Zero Hour? Is ME a twentieth century phenomenon? Perhaps not.

“There are historical diseases that fit its description,” says Dr Shepherd. “In the 1700s there was ‘febricula’ or ‘little fever’, an illness described by physician Sir Richard Manningham at the time, that could have been ME. Florence Nightingale goes down with something and there’s been quite a lot of discussion about whether that could have been ME.

“Life expectancy was short. If someone didn’t thrive they were written off as being sickly. There wasn’t the healthcare for many people and there wasn’t the science to investigate illness. People talk as if ME is a ‘new’, modern illness. But how do we know that?”

But the landscape, he believes, is changing. Few now take A Reconsideration seriously. Globally, there is more biomedical research taking place.

As one scientist pointed out recently, it would be arrogant to assume that because they hadn’t found the causes of ME, that there wasn’t anything there to find.

McEvedy and Beard’s damning conclusions about the cause of ME had a powerful and prolonged effecton UK medical opinion. But the lessons for the future are clear – and many will argue have still not been heeded. Research into ME needs to be scientific, thorough and – when it’s wrong – righted. 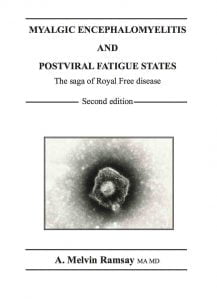 Dr Melvin Ramsay’s little book about early outbreaks of M.E. – including the Royal Free event in 1955 – can be bought from the ME Association. Please order it in our online shop at www.meassociation.org.uk/shop/books/saga-of-royal-free-disease/