Russell Fleming aka @Firestormmer a former editor and author from the PhoenixRising ME/CFS forums. . He tells SARAH STAPLES about the benefits – and pitfalls – of social media for those with ME – and why he’s passionate about making the latest research available for all to read. 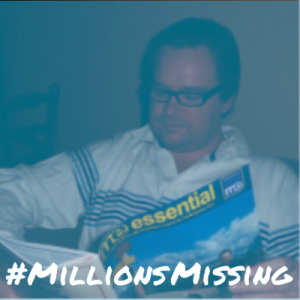 Russell Fleming is talking hashtags. “If you’re new to Twitter, put in #MECFS and you’ll get loads of Tweets up. Or there’s #PWME, #CFS and #MEawarenesshour.

There’s #spoonies, we throw in. Russ chuckles. Briefly it unravels and goes a bit Viz. Spoonies! Pwff! Spooning! Who on earth chose that one! Yes, he agrees after more laughter, there’s #spoonies.

Surprisingly though, the theory of spoons doesn’t only apply to ME but is also used by many others with chronic ill-health.

We’re talking social media and ME. Because in the past 10 years the impact of the web as a place to find support, information – and friendship – for people isolated from society by the illness has been massive. If the real world is out of your reach, the virtual world is at your fingertips.

Not, admits Russ, that it’s without problems and complexities.

The former investment manager for Lloyds was diagnosed with ME in 1999. It robbed him of a promising career, broke down his relationship with his fiancé and left him worrying that the parents he always thought he would look after in their twilight years, will now have to look after him.

His current goal is to walk to a cafe near his home in Wadebridge, Cornwall. “How far away is it?”, I ask. “Well it takes my stepdad about five minutes to get there. On a good day, I can manage the bakery which is about half the distance and takes double the time. But it’s something to aim for, isn’t it??”

He kicked against the diagnosis of ME in the early years. (‘Who wants bloody ME?” he says bluntly. “Who wants an illness with no cure, that’s so vilified and is still so misunderstood?’). Eventually, years of isolation, anger and frustration led to a breakdown.

Social media, along with eventual acceptance followed by a respect for his ME, has been part of his rehabilitation.

“Social media helped me to engage with life again – and with people.

“In the beginning, I started using it for news. Social media is a very useful, particularly Twitter. If you can’t read a newspaper because of brainfog, it’s a way of staying in touch with what’s going on. It’s manageable, digestible – short snippets of information.”

And that’s how the fuse was lit. Now if you’re UK-based, on Twitter, and take an interest in ME research, chances are that at some point a Tweet will have popped up on your timeline from @Firestormmer – a username he has continued to use since his early days on internet forums.

When you have ME and are virtually housebound, the one thing you have is time. From his ground-floor flat, and when he feels able, he will pick at the threads of the latest global science into the ME, sifting it, separating wheat from chaff, before launching it out into the Twittersphere in bite-size snippets.

Russell has also used his acquired expertise to write for the ME Association website on the latest scientific studies.

“THE QUESTION IS HOW COULD RESEARCH NOT BE IMPORTANT?”

“Why is research so important to me? That’s not the question, is it?” he ponders amiably. “I mean, the question is how could it not be important? It has to be. Research is the only way we’re going to go forward and understand this illness.”

His own early forays into social media were tentative. He went a few web forums and, like a shy teenager in a nightclub, hung around in corners working out “how they worked” before he plucked up the courage to start joining in conversations and asking his own questions.

“I think the first one I joined was Foggy Friends. They were great, friendly and supportive really. It gave some desperately needed confidence. Then, when I became interested in ME research and decided I needed to educate myself, I started to look around at research forums.”

And here’s where he sounds a note of caution. Not all forums, he found, were the same. “I joined one after a certain research paper came out. Honestly, you couldn’t disagree with a thing the paper said – in their eyes it was the bible. It was awful and if you said anything they didn’t like, you got shot down in flames.”

That, he says, was not a positive experience.

Eventually he found the Phoenix Rising forum and became its editor, helping other authors bring their articles up to scratch for publication. He was involved in all the latest research, getting live feeds from international conferences, and building contacts with the scientists on the front line. “Phoenix Rising became my home. Through it, I made friends who were either researchers themselves or had the ability to break down the complex stuff so that even I could understand!”

“I started to appreciate how much of a global effort research into ME needs to be. I’m not somebody who can unravel the complexities of it, but I realised that with help I could break it down, get it out there – put a spotlight on it.”

IF PATIENTS DON’T LOOK FOR THE ANSWERS, WHO WILL?

But are patients the right people to do that? You can never truly look at research from a position of neutrality, we venture. “If we don’t, who does?” he says starkly. “If it wasn’t for patients digging away, we wouldn’t have known about the problems with the PACE trial.

“That was patient power. It’s pretty awesome really. Those guys, they knew what they were doing. That’s what Freedom of Information requests are all about – getting to the truth. And how neutral are researchers? That’s something we should always ask.”

A relapse last year has meant that Russell is not able to do as much as before. The fog has descended and his concentration isn’t what it was. He hasn’t read a research paper in depth for over a year. But he’s still Tweeting and tries to stay abreast of what’s happening. Much of his time now is taken up as a member of the patient advisory group for the MEGA research project.

His own ME has led to him not doing as much at the minute. The fog has descended and his concentration isn’t what it was. He hasn’t read a research paper in depth for a year or so. But he’s still Tweeting regularly, and stays in touch with what’s happening scientifically.

In all of this, admits Russ, there is an irony to him becoming ‘Mr Twitter’. He has only recently given up his ancient Nokia for a Smartphone.

“I can’t text on the damn thing,” he laughs. “My mum sends me a message and then calls hours later and says: ‘why haven’t you replied?’ I’m like: ‘My fingers won’t work the ruddy buttons properly!’

RUSSELL’S DOs AND DON’Ts FOR NEWCOMERS TO SOCIAL MEDIA

* Forums are like people – they’re all different and one-size doesn’t fit all. Ask for recommendations and find the one that you like and feel comfortable with.

* Look for forums that have a good moderation team and good rules. Having moderation comments will be checked and can be removed if they do not comply.

* Don’t jump straight in. You will have to register to enter a forum. Read what other people are posting, follow a few threads and get comfortable to make sure you know your way around.

* When you decide you’re ready to post look for a ‘welcome’ thread. This gives you a chance to introduce yourself and make friends.

* With all social media, treat everyone with respect. Only post online what you would say in a face-to-face conversation in the real world.

* A forum should be a safe place where you feel supported and which helps you deal with your ME. It’s time to walk away if you feel that it is negatively affecting your health.

* And don’t post personal information that you would be uncomfortable with strangers knowing about. Personal details as well as comments once entered on a forum – even if shared with someone you might consider a friend – can easily be copied and posted across the internet and once shared it is almost impossible to get the information removed