We are asking these questions because:

10 KEY FACTS: THE THYROID GLAND AND THYROID FUNCTION TESTS IN RELATION TO ME/CFS

1 The thyroid is a butterfly-shaped gland that sits in the front of the neck, just below the Adam’s apple. It produces a hormone called thyroxine – also called T4 (because it contains 4 atoms of iodine). This hormone is then converted in cells and tissues into an active form of thyroid hormone called triiodothyronine or T3 (which has 3 atoms of iodine). These are a really important hormones because they are needed for all the cells in the body to work normally.

2 Thyroid disease is common. About one adult in 80 has hypothyroidism – where the output of thyroxine is reduced. Hypothyroidism is much more common in women (15/1000) than men (1/1000) and becomes increasingly common over the age of 50. Hyperthyroidism, which causes an increase in the amount of thyroxine being produced, is less common.

3 Hypothyroidism causes a number of characteristic symptoms – most of which are related to a slowing down in the function the tissue or organ involved. Common symptoms that overlap with ME/CFS include fatigue, muscle weakness/cramp/pain, cognitive dysfunction, increased sensitivity to the cold, tingling sensations in hands and fingers, weight gain. Symptoms that are not normally found in ME/CFS include dry and/or puffy skin, hair loss – including loss of the outer third of the eyebrows, hoarse voice, constipation, heavy periods and low pulse rate (bradycardia).

4 Hyperthyroidism causes a number of symptoms which are very similar to anxiety – such as mood swings, irritability and twitching or trembling – and can be misdiagnosed as anxiety. Other symptoms include palpitations, sweating, heat intolerance, weight loss, diarrhoea and sore or gritty eyes. And there may be an obvious swelling of the gland in the neck.

5 Because hypothyroidism is a common medical condition, some people will have hypothyroidism and ME/CFS. The thyroid problem may not be picked up because some of the symptoms of hypothyroidism are very similar to ME/CFS. So everyone should have their thyroid function tested before a diagnosis of ME/CFS is confirmed. The MEA believes that periodic checks on thyroid function for people with ME/CFS over the age of 50 is also a sensible precaution to take, especially when there is a deterioration of health for no obvious reason. 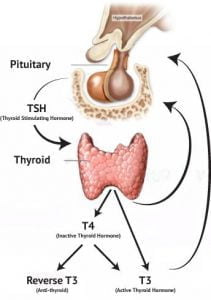 6 The output of thyroxine from the thyroid gland is controlled by a hormone called thyroid-stimulating hormone (TSH). This is produced by a small gland under the brain called the pituitary gland. Along with the hypothalamus, the pituitary constantly monitors the level of thyroid hormone in circulation. If the level of thyroid hormone falls, the output of TSH is raised in order to stimulate the thyroid gland to produce more thyroxine – rather like a heating thermostat in the home.

7 Hypothyroidism is therefore diagnosed by finding an increased level of TSH and a reduced level of T4 in the blood. Early on, and in borderline/sub-clinical cases of hypothyroidism, both tests can be within the normal range with the TSH moving towards the upper limit of normal and the T4 at the lower end. The level of T3 is not normally measured but there are a people where the problem lies in the conversion of T4 to T3 – not the production of T4.

Thyroid peroxidase antibodies should also be measured in borderline cases if the TSH remains elevated.

If there are any doubts about either the diagnosis or management of hypothyroidism, I would strongly advise asking a GP for a referral to an NHS hospital hormone specialist (endocrinologist) rather than heading off to the private sector for what can be very expensive consultations, tests and sometimes very questionable treatments.

8 Hyperthyroidism is diagnosed by finding a raised level of T3 and T4 and a reduced level of TSH.

9 Although there is consistent research evidence of dysfunction affecting the hypothalamic-pituitary-adrenal axis in ME/CFS (which reduces the output of cortisol from the adrenal glands), there is no evidence to indicate that hypothyroidism is more common in people with ME/CFS, or is more likely to occur if you have ME/CFS.

10 Hypothyroidism is treated with thyroxine and this is normally carried on throughout life. The decision on whether or not to treat, or just monitor, someone with borderline thyroid function test results will depend on individual circumstances. There is no indication to treat people with ME/CFS who have normal thyroid function tests with thyroxine – as some doctors have done. This is not only unnecessary. It can also be dangerous, especially when there may be adrenal gland dysfunction present (i.e. low cortisol) as well.

There are also some concerns about the way in which a synthetic version of T4 is almost always prescribed.

Synthetic T4 works in most cases but, as already noted, in some cases the problem does not lie with the thyroid gland failing to produce enough T4 – the problem lies with the conversion of T4 to active T3.

T3 can be taken in tablet form but the cost here has escalated to the point where two months supply of a drug that is fairly cheap to produce is around £300.