Towards the end of September, the world’s oldest scientific organisation – the Royal Society – hosted a two-day research conference: Understanding the neurobiology of fatigue.

It was organised by researchers from University College London and brought together many disciplines with the aim of examining the pathogenesis of fatigue:

“Fatigue is poorly understood, yet it is a common problem. Recent developments uncovering mechanistic underpinnings of pathological fatigue suggest a complex psychological and neural aetiology.

“This interdisciplinary meeting brings together views from different disciplines: sensorimotor processing, decision-making, emotion, meta-cognition, energy economics and neuroimmunology to examine the pathogenesis of fatigue that will be informative to both basic neuroscientists and clinicians interested in fatigue.

One of the distinguished researchers was Professor Julia Newton from the University of Newcastle, who spoke about the role of autonomic dysfunction. Her presentation was well received by those members of the patient community who had been able to listen to the recording.

We contacted Professor Newton and obtained her permission to publish the following transcript, with the aim of enabling more people to follow what she had to say. She was also kind enough to send us her slides, and these can also be downloaded from the link below.

Standing up for fatigue

Fatigue is a common symptom that arises in association with a range of chronic diseases and when it occurs with a recognised constellation of symptoms is Chronic Fatigue Syndrome or Myalgic Encephalomyelitis.

Fatigue impacts significantly upon quality of life and recent research has confirmed is frequently associated with autonomic nervous system dysfunction. The talk will focus upon research exploring the role of autonomic dysfunction in the manifestation of the symptom of fatigue.

This will include both subjective and objective assessment of autonomic dysfunction and describe novel MR methodologies to explore the association of muscle, cardiac and liver dysfunction in those with chronic fatigue syndrome and fatigue associated conditions.

The importance of autonomic dysfunction as a recognised phenomenon in fatigue highlights the opportunities that there may be for targeted therapeutic intervention for autonomic phenotypes in those with CFS/ME and fatigue in chronic disease. 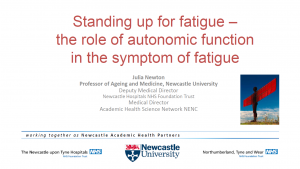 “For those of you who aren’t familiar, chronic fatigue syndrome/M.E. is actually considered to be a neurological disorder by the world health organisation. It’s given the ICD code 10, G93.3, but it remains a medically unexplained condition. It’s recognised as being physiologically distinct from depression, and there are emerging, identifiable, immunological, neurological, endocrine, and particularly, autonomic, abnormalities.

“For those of you who are not clinically familiar with CFS/ME or haven’t actually met a patient with this condition, it’s a diagnosis where a constellation of symptoms come together. They are heterogeneous in their nature, usually, but the individual usually has severe, debilitating fatigue for at least four months – together with other symptoms.

“At the moment, and we may come to debate this throughout this meeting, there’s no evidence of other medical or psychiatric problems, although patients do experience secondary psychiatric or mental health issues as a consequence of the significance and the severity of the symptoms that they are experiencing.

“But as we sit here today, there are no biological-based diagnostic tools for CFS/ME, and we have no clinical pointers when seeing the patient, and generally, the routine blood tests that we do in clinical practice, are negative.

“As we’ve heard, fatigue is a much more significant and broader symptom that is experienced by a large proportion of the population. For those of you who meet somebody who describes or experiences fatigue – or perhaps have had it yourself – you’ll realise it is very different from the symptom of tiredness. And often it is very different from the sensation of sleepiness. And usually, as a symptom, it is not relieved by sleep or rest.

“Increasingly, we are beginning to recognise fatigue as a symptom across a whole range of different chronic illnesses. The clinical practice that I have in Newcastle, focuses entirely upon managing fatigue in chronic illness, rather than in CFS/ME. 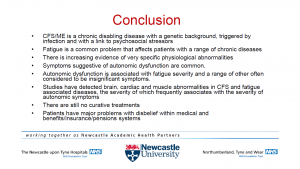