Book review by David Aaronovitch: “It’s All in Your Head – True Stories of Imaginary Illness” by Dr Suzanne O’Sullivan

Dr Suzanne O’Sullivan and David Aaronovitch have both fallen into the trap of concluding that medical symptoms that cannot be readily explained are likely to be psychological in origin, or even imagined.

Consequently, people with unexplained medical symptoms are treated, as they often are in the case of myalgic encephalomyelitis/chronic fatigue syndrome (ME/CFS), with behavioural treatments such as cognitive behaviour therapy (where most people with ME/CFS consistently report that they gain no benefit) and/or graded exercise therapy (where around 50% of people with ME/CFS repeatedly report that they are made worse as a result).

Whilst accepting that physical symptoms can be caused by a psychological illness, far too many patients with these unexplained symptoms are now being conveniently lumped together with a dustbin diagnosis known as a somatic syndrome – leaving no incentive to carry out research aimed at finding an underlying cause, or an effective drug treatment. This is bad and lazy medicine.

I have worked in both hospital medicine and psychiatry and have dealt with several thousand people with ME/CFS over the past 30 years. I also have personal experience of this illness following a chickenpox encephalitis. This knowledge and experience has led me to believe that there is a wide range of clinical presentations and disease pathways that come under the ME/CFS umbrella.

This is now supported by solid research evidence that has identified abnormalities involving the brain, muscle, endocrine/hormone and immune systems – with a recent report from the Institute of Medicine concluding that ME/CFS is a serious, complex, systemic disease that can profoundly affect the lives of patients. These are abnormalities that cannot be explained by a wholly psychological model of causation. One consequence of this research is the finding that some people with ME/CFS benefit from the use of Rituximab, an immunomodulatory drug that is normally used to treat the malignant disease lymphoma. A phase 3 clinical trial involving Rituximab in ME/CFS is now in progress.

The continuing refusal by sections of the medical profession and media to read the peer-reviewed research that is being published on ME/CFS is not only inexcusable – it is an important reason why people with ME/CFS are justifiably upset and refuse to accept they have a psychological or imaginary illness when they do, in fact, have a serious neuroimmune illness that is just as genuine and disabling as multiple sclerosis.

The UK ME/CFS Research Collaborative will be holding its annual research conference in Newcastle in October. There will be key sessions covering neuropathology (led by the Chairman of the Medical Research Council’s Neurosciences Board) and clinical trials (including Rituximab). I hope that both author and reviewer will consider attending this meeting where they will discover that ME/CFS is neither unexplainable nor imaginary. 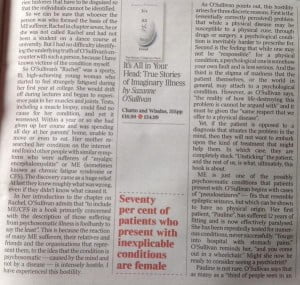 There is an unusual tone that runs through this book from page 1 to page 315 — it is of patient, compassionate frustration. It is the tone of someone who has spent a quarter of a century carefully explaining to people — very ill people — what they do not want to hear, or to medical colleagues what they do not have the training to cope with. This unwanted explanation is that the illnesses the patients have are simultaneously real but have no physical origins, and they are products of the mind.

A consultant neurologist at the National Hospital for Neurology and Neurosurgery, Suzanne O’Sullivan is the latest writer in what I think is a necessary and admirable new trend — that of physicians and practitioners sharing with readers the real experiences of their professions. This necessarily involves discussing case histories: histories which have to be disguised so that the individuals cannot be identified.

So we can be sure that whoever the person was who formed the basis of the ME sufferer, Rachel in chapter seven, he or she was not called Rachel and had not been a student on a dance course at university. But I had no difficulty identifying the underlying truth of O’Sullivan’s encounter with such a person, because I have known two or three victims of the condition myself.

So O’Sullivan’s “Rachel” was a sporty, fit, high-achieving young woman who started to feel strangely fatigued during her first year at college. She would drift off during lectures and began to experience pain in her muscles and joints. Tests, including a muscle biopsy, could find no cause for her condition, and yet it worsened. Within a year or so she had given up her course and was spending all day at her parents’ home, unable to move or even to eat. Her mother researched her condition on the internet and found other people with similar symptoms who were sufferers of “myalgic encephalomyelitis” or ME (sometimes known as chronic fatigue syndrome or CFS). The discovery came as a huge relief. At last they knew roughly what was wrong, even if they didn’t know what caused it.

In her introduction to the chapter on Rachel, O’Sullivan admits that “to include ME/CFS in a book primarily concerned with the description of those suffering from psychosomatic illness is foolhardy to say the least”. This is because the reaction of many ME sufferers, their relatives and friends and the organisations that represent them, to the idea that the condition is psychosomatic — caused by the mind and not by a disease — is intensely hostile. I have experienced this hostility.

As O’Sullivan points out, this hostility arises for three discrete reasons. First is the (essentially correctly perceived) problem that while a physical disease may be susceptible to a physical cure, through drugs or surgery, a psychological condition is inevitably harder to prescribe for. Second is the feeling that while one may not be “responsible” for a physical condition, a psychological one is somehow your own fault and is less serious. And the third is the stigma of madness that the patient themselves, or the world in general, may attach to a psychological condition. Yet, as O’Sullivan says, “the reality of how life-destroying this problem is cannot be argued with” and it must be given the “same respect that we offer to a physical disease”.

Yet, if the patient is utterly opposed to a diagnosis that situates the problem in the mind, then they will not want to embark upon the kind of treatment that might help them. In which case, they are stuck. Completely stuck. “Unsticking” the patient, and the rest of us, is what, ultimately, this book is about.

ME is just one of the possibly psychosomatic conditions that patients present with. O’Sullivan begins with cases of “pseudoseizures” — that is fits that resemble epileptic seizures, but which can be shown to have no physical origin. Her first patient, “Pauline”, has suffered 12 years of fitting and is now effectively paralysed. She has been repeatedly tested for numerous conditions, never successfully. “You go into hospital with stomach pains,” O’Sullivan reminds her, “and you come out in a wheelchair.” Might she now be ready to consider seeing a psychiatrist?

Pauline is not rare. O’Sullivan says that as many as a “third of people seen in an average general neurology clinic have symptoms that cannot be explained by medical tests or examinations. In those people, an emotional cause is often suspected.” We know our minds create involuntary physical responses, such as blushing or crying (O’Sullivan does not mention some of our more indelicate parasympathetic responses), yet we resist the idea that illness could have a mental cause. We tend to believe that if the mind is involved we are either conscious of it, in which case we are con-artists and malingerers, or unconscious, in which case we are mad.

But O’Sullivan says that the proportion of her patients who are dissimulators — who are “putting it on” — is small. Instead, she thinks that, for various reasons, our minds can express distress, without our being conscious of it, through our bodies. If we cannot recognise this possibility, then we cannot deal with it and so are fated, instead, to undergo pointless operations, to take possibly harmful drugs and — almost invariably — to fail.

As she points out, the association of the subconscious with physical illness is not new. In the late 19th and early 20th-centuries, pioneer neurologists, like Jean-Martin Charcot, psychologists, like Pierre Janet, and psychotherapists, like Sigmund Freud, studied and theorised about how the unconscious mind works. And one, very general, conclusion was that illness could be a drastic “way out” or diversion from underlying mental distress that the patient could not confront.

However, O’Sullivan adds another kind of possibility. She notes that something like 70 per cent of patients who present with inexplicable conditions are female. Why is this? She speculates that because women are more likely to suffer traumatic sexual abuse, perhaps then physical illness is some sort of response to that. But she also wonders whether we aren’t immensely vulnerable to our own suggestibility. I feel a twinge in my back. I might take no notice of it, or I might look it up online. If I do the latter, perhaps I notice another associated pain which I also half think I had. And so on.

The fact is, as O’Sullivan admits in this honest, fascinating and necessary book, that we just do not know. Perhaps, one day, with the advance of neuroscience, we will. And perhaps we won’t. But, at the very least, we should keep an open mind.