A FORMER serviceman from Llanelli is pushing his body to the limit — taking on 11 gruelling physical challenges in a year to highlight a debilitating condition that changed his mum’s life.

Drew Roberts, who served as Senior Aircraftman Technician with the RAF for 12 years, will be breaking the pain barrier to spread the word about Myalgic Encephalopathy (ME).

The 33-year-old is completing some of the toughest extreme obstacle races in the UK, running between three and 21 miles and braving mud, rivers and swamps, walls and straw bales on the way.

He hopes to raise £500 for the ME Association, a national charity that supported his mum, Toni, after she was diagnosed with the condition in 1995.

“I’m exhausted when I finish a race, but after a few days I’ll be back in the gym training and my aches and pain will disappear,” said the former Bryngwyn School pupil, who lived in Bryn until he was 19 before moving away.

“For mum, that tiredness never goes.

“Her condition changes day to day. Maybe she’ll be fine one day and will be able to do a little shopping — but the next, she’ll fall over for no reason other than her legs don’t work or she will have to go back to bed because she is so tired she is unable to string a sentence.

“And because of her illness, she is now registered disabled.”

ME, also known as Chronic Fatigue Syndrome, causes persistent fatigue which affects everyday life and doesn’t go away with sleep or rest. 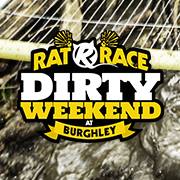 In May, he completed the Rat Race Dirty Weekend in Lincolnshire, a race organisers bill as the ‘largest assault course on earth’ which consists of 200 obstacles over 20 miles, finishing 93rd out of more than 4,400 competitors.

Drew added: “The races are tough. In the Rat Race, someone dislocated their shoulder and there is the risk of hypothermia because the water we go through is so cold. But I enjoy taking part — it’s quite addictive!

“I’ve done fundraising before, mainly for Help for Heroes and the British Legion, but I thought I’d like to do something for mum this time. I know the ME Association helped her through a difficult time.”

Toni, of the town centre, said she was very proud of her son’s efforts for a charity that has touched their lives.

“There is so much more research needed in order to diagnose, treat and ultimately cure this horrible illness,” she said.

“ME has changed my life beyond all recognition. I am not the person I used to be — and I still miss her.

“The ME Association is a lifeline, particularly in those early days and hey helped me to realise that I wasn’t alone.”

Before the end of 2015, Drew, who left the RAF in 2012 and is now a Composite Fitter at AgustaWestland, has other obstacle races planned for Edinburgh, Nottingham, Manchester and even a night run in London — and hasn’t ruled out adding more to his challenges.

“I’d really like to do the London Marathon, but we’ll have to see!” he says.

“One of the cruellest aspects of ME is the way it wears down its sufferers. Just getting out of bed in the morning can be their equivalent of one of Drew’s marathon efforts.”

If you would like to sponsor Drew, please visit www.justgiving.com/Drew-Roberts2/