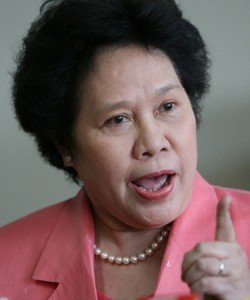 Filipino senator Miriam Defensor Santiago – the first Asian from a developing country to be elected a judge at the International Criminal Court in The Hague – will be applying for a four months delay in taking up her seat in the hope that she recovers from chronic fatigue syndrome.

According to ABS/CBN News, she says she is compelled to seek extended sick leave following a diagnosis of CFS by Dr Joven Cuanang, Medical Director, St. Luke’s Medical Centre in Quezon City.

A lawyer, she was elected to the ICC in 2011 and told to report for duty in September this year. The court tries cases of genocide, war crimes and crimes against humanity.