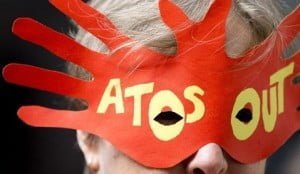 The desperate letters from benefit cuts victims.There has been an astonishing response from readers, a deluge of personal horror stories about the Work ­Capability Assessment.

A week ago, in this column, I told the story of Dr Greg Wood, the whistle-blower who resigned from Atos – the controversial French company paid £110 million a year to test British benefits claimants.

Dr Wood left the company after his bosses asked him to declare a person he felt was severely ill “fit for work”.

There has been an astonishing response from readers, a deluge of personal horror stories about the Work ­Capability Assessment.

Every letter supports what Dr Wood claimed – that following the election of the Coalition government, the WCA was made more stringent and is “cracking down on people who can’t defend themselves”.

One of the hardest to read came from Sarah, a woman from Northumberland who wishes to remain anonymous.

Over her last three Atos assessments she has gone from 21 points to 0 – despite suffering a chronic back condition that has left her barely able to move.

With her benefits cut, she feels such a burden on her family that she has contemplated taking her own life.

“Instead, six months ago,” 47-year-old Sarah says, “I started suffering some gastro-intestinal problems, the kind you see on adverts followed by the advice to see your GP in case it’s cancer. I’ve been ignoring them… if it’s cancer then nobody needs to feel bad when I die…”

These are desperate letters.

Another came from a man saying that if his WCA appeal fails he intends to stop his thyroid medication which would kill him in a fortnight.

He compared his political stance with that of Bobby Sands, the IRA man who died on a hunger strike.

There were also tales of eye-watering incompetence.

Last week, a couple of days after Liam Byrne, Labour spokesman on social ­security, accused the Department for Work and Pensions of being “guilty of incompetence on an industrial scale,” a woman called Lyn Bruce signed for a package from the DWP.

For seven months she has been appealing against being found fit for work.

Inside – in a huge breach of data protection – was a 260-page medical report on a woman called Shelley Maxwell.

Lyn, 54, is a former bakery manager from Kettering, Northants. Shelley, 51, is a former office worker from a village near Buxton, Derbys.

Lyn has four prolapsed spinal discs, a muscle-wasting illness, depression and a hole in the heart.

She asked for her paperwork after going from 32 to 0 points at her WCA.

Shelley suffers from lifelong debilitating sleep disorders, diabetes, anxiety and depression. She is currently appealing a decision to cut the disability premium to her income support.

When Lyn opened the package, she panicked. She says: “Who had got my files and all my personal information?”

She rang the DWP but also called Shelley to warn her that her notes were in the wrong hands. “We are both making an official complaint,” Shelley adds.

Shelley hasn’t been able to pay utility bills since her income support was cut. “Gas, electric, water – they are mounting up. I’ve even stopped opening them,” she says.

Lyn has still not received her notes. Meanwhile, on her reduced benefit, her family is struggling to pay the mortgage. “It’s just so much worry,” Lyn says. “You hear of people who’ve committed suicide, well that’s gone through my mind more than once. They’ve scored me zero points. Thay are calling me a liar. I can’t bear it. They’re messing with people’s lives.”

The DWP says: “We take the protection of people’s personal information very seriously. This was a regrettable case of human error and we have apologised to both people involved. We also visited Mrs Bruce to ensure the document was returned safely.”

It adds: “We have considerably improved the Work Capability Assessment process. The percentage of people entitled to Employment and Support Allowance is now at its highest level with over half of people completing a WCA eligible for the benefit, but everyone has the right to appeal a decision if they disagree.”

Last week, the cost of the welfare “reforms” were estimated at £1.4billion. No wonder, despite draconian cuts, the bill keeps soaring.

Meanwhile, a leaked survey has revealed DWP staff working on the universal credit system found the work was “soul destroying” and said there was zero leadership.

Yesterday the charity Parkinson’s UK joined the fray, saying that 45% of people with lifelong illnesses like Parkinson’s, multiple sclerosis and cystic fibrosis were told they should work – and accusing the Government of “unspeakable failure”.

Today, this newspaper tells how people are charged up to £130 for the paperwork for WCA appeals. And of a wheelchair user who applied for a job at Atos but couldn’t get to the interview because the lift only went to the fifth floor.

Welfare reform is the most cynical of this cynical Government’s policies. This is the human equivalent of fracking – a violently destructive force that tears through vulnerable fault lines, the weakest parts first.

Yet where is the mass opposition standing alongside disability groups like DPAC and Atos Miracles? Where are the celebrities? The sympathy is greater for badgers than for disabled welfare ­claimants.

“I’ve been accosted in the street by strangers and berated for being a ‘leech’ because I walk with a stick,” Sarah writes. “Twice I’ve had both abuse and missiles hurled at me from moving cars.”

If Sarah lets cancer take over her body, that’s one less person on the sick, right?