Today we launch a new leaflet “Premenstrual Syndrome, Female Hormones and ME/CFS” and provide an extract below.

The leaflet is available to members of the ME Association in the next issue of ME Essential magazine, and also available in our online shop (see bottom of page for details).

The premenstrual syndrome (PMS) – also known as premenstrual tension and premenstrual disorder – is a collection of symptoms that appear every month around the time of menstruation.

Some of these symptoms also occur in ME/CFS.

So, it’s not surprising to find that a significant proportion of women with ME/CFS notice an exacerbation of their ME/CFS symptoms at this time.

In fact, the NICE guidance on PMS notes that ME/CFS should be considered when making a diagnosis of PMS.

This new ME Association information leaflet summarises what we currently know about PMS, how it can overlap with ME/CFS, and the various treatment options that are available. The information draws on guidance to doctors from NICE, the Royal College of Obstetricians and Gynaecologists (RCOG) and National Association for PMS (NAPS).

PMS symptoms start at some point after ovulation – the release of an egg from the ovary each month. Ovulation occurs about two weeks before the start of a period.

PMS is very common, with NAPS reporting that between 3% and 30% of women have some degree of PMS. For most women, PMS symptoms are mild and not particularly troublesome and may then disappear. However, 5% to 8% have more persistent and severe symptoms. PMS can occur at any age from puberty through to the menopause. 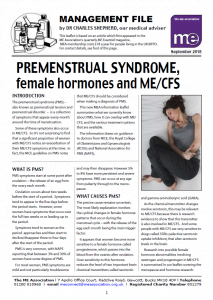 The precise cause remains uncertain. The most likely explanation involves the cyclical changes in female hormone patterns that occur during the menstrual cycle – with the release of the egg each month being the main trigger factor.

It appears that women become more sensitive to a female hormone called progesterone, which passes into the blood from the ovaries after ovulation. Over-sensitivity to this hormone reduces the level of two important brain chemical transmitters called serotonin and gamma-aminobutyric acid (GABA).

As the chemical transmitter changes involve serotonin, this may be relevant to ME/CFS because there is research evidence to show that this transmitter is also involved in ME/CFS. And some people with ME/CFS are very sensitive to drugs called SSRIs (selective serotonin uptake inhibitors) that alter serotonin levels in the brain.

What are the symptoms?

PMS can cause a range of physical and psychological symptoms.

This new leaflet can be read in full in the November issue of ME Essential our exclusive magazine for members of the ME Association.

If you are not a member you can join from as little as £1.50 a month (£18 a year) and if you pay by annual standing order, you will qualify for £10 of free leaflets.

“Premenstrual Syndrome, Female Hormones and ME/CFS” is also now available from our online shop which offers the largest collection of information relating to ME/CFS anywhere on the internet.