GETSET was a clinical trial in secondary care of a new approach for people with ME/CFS and it was published in the Lancet on 22 June 2017. 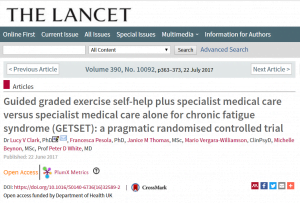 The trial used the principles of graded exercise therapy, delivered in a self-help booklet, with up to four sessions of assistance offered remotely by trained physiotherapists via phone or Skype.

A total of five letters have now appeared in the Lancet critiquing elements of the trial, and the authors have now issued a response to all of them (below).

In view of the fact that the results from this clinical trial are going to form part of the research evidence that NICE will be examining – in relation to the new clinical guideline – ME Association trustees decided that we should make a very careful and thorough response to the study. We published our review on 28th June 2017.

ME Association Review of GETSET

For the benefit of anyone who just requires a summary of the key points and concerns that we made, our main criticisms were:

Therapists reported that 29% of patients did not adhere more than “slightly” to the exercise programme, despite 88% attending at least 75% of their guided support. This area requires more research to understand non-adherence and how it might be improved.2

We used the National Institute for Health and Care Excellence (NICE) definition of chronic fatigue syndrome as these are the commonest criteria used by UK clinicians in secondary care.3 A subgroup analysis using two other definitions of chronic fatigue syndrome made no significant difference to the findings. There were no significant differences in safety outcomes between treatment arms once missing data were accounted for.

Anna Wood is concerned about adherence to GES and missing data; both were reported in the paper and neither significantly altered our findings or conclusions.1 The use of outcome assessments by mail and available resources prevented the use of objective measures, such as actigraphy, as suggested by Crawford. We suggest that using patient-reported outcome measures is sensible in symptom-defined illnesses such as chronic fatigue syndrome. The largest trial of pacing therapy suggested that it had a worse, not better, safety profile when compared to more active rehabilitation interventions similar to GES.4

In response to Robert Saunders, we can confirm that all patients reported post-exertional malaise (PEM) and/or fatigue at baseline (as is required to meet NICE criteria for chronic fatigue syndrome); no patients were excluded based on having PEM. A previous trial showed that post-exertional fatigue improved more after graded exercise therapy compared to after both SMC alone and pacing therapy.5The lack of a significant difference in safety outcomes between treatment arms reinforces the safety of GES for chronic fatigue syndrome.

Karen Kirke is concerned about severely affected patients with chronic fatigue syndrome. We acknowledge that all participants were required to attend a clinical assessment, which would exclude those that were housebound.1 That being said, use of teletherapy for patients too unwell to attend clinic is an innovative approach that merits further research.6, 7

PDW reports grants from the UK National Institute of Health Research and the Sue Estermann Fund during the conduct of the study, and personal fees from Swiss Re-insurance company outside the submitted work; he is an appointed member of the Independent Medical Experts’ Group, a non-governmental body, which advises the UK Ministry of Defence about its Armed Forces Compensation Scheme. PDW provided unpaid advice to the UK Department for Work and Pensions until 2015. All other authors declare no competing interests.

The Lancet – Letters of concern

The results of the guided graded exercise self-help trial (GETSET) by Lucy Clark and colleagues1 reaffirm that graded exercise therapy (GET) is not a rehabilitative treatment for chronic fatigue syndrome.2

Although fatigue (measured by Chalder Fatigue Questionnaire [CFQ]) and physical functioning (assessed using the Short Form-36 physical function [SF-36 PF] subscale) improved in the guided graded exercise self-help (GES) group (and the non-intervention group), these effects were by far insufficient to come close to the normal levels defined previously3 by one of the GETSET authors (CFQ ≤6 and SF-36 PF ≥85).

The observation that ”physiotherapists reported that […] 42% adhered to GES completely or very well, […] 30% moderately well, and […] 29% slightly or not at all”1 makes far-reaching conclusions impossible.

Also, the trial1 selected patients using National Institute for Health and Care Excellence criteria, rather than the commonly used Fukuda criteria for chronic fatigue syndrome.4 Although limiting the analysis to participants who met these Fukuda criteria did not change the results, the authors also state that the ”relative absence of intervention by diagnostic subgroup interactions might be related to the study not being powered to detect all interactions“.1

Finally, the conclusion that GET is a safe intervention is at odds with another GETSET publication,5 which reported that a chronic fatigue syndrome patient subgroup deteriorated due to GET and observed that the “deteriorated group reported experiencing more barriers to GET, including a worse exacerbation of symptoms in response to GET”.5

Overall, the conclusion that GET is an effective and safe treatment for chronic fatigue syndrome is not substantiated by the outcomes.

Participants in the GETSET trial by Lucy Clark and colleagues3 had a mean age of 38·1 years in the active treatment arm (guided graded exercise self-help [GES] group) and 38·7 years in the control group.

Clark and colleagues state that “GES significantly improved fatigue and physical functioning compared with SMC [specialist medical care] alone”. However, this modest change in a self-reported outcome measure in a non-blinded trial, in which bias is highly likely without use of objective measures of activity, is extremely unlikely to translate to a clinically meaningful improvement for patients. Nor does this change return them anywhere close to healthy and robust good physical functioning compared with controls, which patients heartily desire.

Overall, these observations suggest such modest improvements are unlikely to be due to countering deconditioning and exercise avoidance as proposed by the authors, but are much more likely to be accounted for by nothing more than the placebo effect, in other words a desire by patients to please their therapists.

Moreover, there was no attempt during this trial to obtain measurable objective activity levels to ascertain if patients increased exercise and activity or complied with the intervention at all.

The CONSORT statement on harms notes that “it is important to report participants who are non-adherent or lost to follow-up because their actions may reflect their inability to tolerate the intervention.”1

It is thus welcome that Lucy Clark and colleagues2 report physiotherapist-rated data on adherence; they considered that only 42% of participants adhered to guided graded exercise self-help (GES) completely or very well.

The protocol notes that to “measure departure from intended treatment, participants will be asked at follow-up whether they adhered to the booklet and guidance, and how much PA [physical activity] they undertook in the past week.”3 It would be useful if Clark and colleagues could now also publish such data.

A review of eight surveys (n=4338) found 51% of patients with chronic fatigue syndrome or myalgic encephalomyelitis reported being harmed by graded exercise therapy (GET).4 Unsurprsingly, such findings have led to concern about GET’s safety. It would therefore be preferable if researchers also used and reported on other objective tools to measure adherence, such as actometers and heart rate monitors, which are much more readily available now than in the past.

According to the GES Therapist Manual “a central concept of GET and GES is to maintain exercise as much as possible during a CFS/ME [chronic fatigue syndrome/myalgic encephalomyelitis] setback.”5More adherence data could help investigate whether the lower rates of harm found in research studies are due to patients not complying with this central concept and instead using pacing, which has been associated with a lower rate of harm in surveys.4

I was surprised to read that the GETSET trial by Lucy Clark and colleagues1 excluded participants who had physical contraindications to exercise, as such a criterion would appear to exclude anyone suffering from post-exertional malaise (PEM).

In its 2015 report,2 the US Institute of Medicine concluded: “There is sufficient evidence that PEM is a primary feature that helps distinguish ME/CFS [myalgic encephalomyelitis/chronic fatigue syndrome] from other conditions”. Indeed, post-exertional neuroimmune exhaustion is a compulsory requirement for a diagnosis of myalgic encephalomyelitis under the International Consensus Criteria.3

The disputed National Institute for Health and Care Excellence criteria that were used in the GETSET trial1 are less precise, stating that “post-exertional fatigue and/or malaise” must be present for a diagnosis of chronic fatigue syndrome or myalgic encephalomyelitis to be considered, whereas “physical or mental exertion makes symptoms worse” is only listed as a possible symptom, not a requirement.4

Whether Clark and colleagues interpreted post-exertional fatigue to mean the abnormal physical responses to exertion that have been reported in other myalgic encephalomyelitis and chronic fatigue syndrome studies is unclear.5 If they did, it would appear that the GETSET participation requirements were self-contradictory. If they did not (as the inclusion of patients with high baseline Short Form-36 physical function scores suggests), this should be made clear.

Nevertheless, given the inherent bias of unblinded trials that rely on subjective outcome measures,6with less than one in five participants having reported any benefit from guided graded exercise self-help, the evidence GETSET provides that this strategy is unlikely to be beneficial to most people diagnosed with chronic fatigue syndrome (however it is defined) should not be overlooked.

As follow-up GES sessions were done by Skype and telephone, this result might suggest to some clinicians the possibility of modifying and extending this intervention to patients with severe and very severe chronic fatigue syndrome, all of whom are housebound and some of whom are bedbound. Indeed, the accompanying commentary acknowledges that patients with severe chronic fatigue syndrome were ineligible for this secondary-care trial, but suggests that GETSET shows that “graded exercise is effective even in individuals with severe symptoms.”2

GETSET’s sample was higher-functioning than in previous trials, with a baseline mean SF-36 PF score of 49, compared to PACE’s 38 and FINE’s 30.1, 3, 4 Housebound patients have been reported to have a mean SF-36 PF of 17.5

Extrapolating GETSET’s reported modest short-term gains for a small number of higher-functioning patients to the severe and very severe group is likely to be inappropriate. When trials included some severe patients, such as FINE’s 11% non-ambulatory patients, no short-term or long-term benefit to physical functioning for rehabilitation over usual care was found.4 When patients undertook graded exercise therapy with chronic fatigue syndrome specialised therapists, 39% of severe to very severe patients reported being very much worse afterwards, compared to 22% of mild to moderate patients.6

Available evidence suggests that with interventions aimed at increasing activity, severe to very severe patients with chronic fatigue syndrome do worse, not better, than their milder counterparts.