A few months ago, we asked our Facebook community what difference having a pet in their lives made to their abilities to cope with M.E. Most people wrote telling us that their pets were a lifeline; a reason to keep going, to get up every day.

Jeanette freely admitted that since being forced to give up work through ill health 11 years ago, she doesn’t know what she’d have done without her dogs: she would have been so lonely. Catherine told us that her dog, Bluebell, had been her constant companion since developing this awful illness and had kept her sane.

And Sarah said, “Although a lot of my spoons go to walking and training my dog Ellie, without her I wouldn’t leave the house. I am on my own all day until the other half comes home in the evening, in a town where I don’t know anybody. She is a good and loyal companion”

It’s hard to cope with the fluctuations of M.E. One moment you’re feeling OK, the next, you’re floored, but our pets seem to understand and are able to adapt.

Bev wrote, “On a bad day my dogs curl up beside me and are ever so gentle. I’m often home alone and their company is a godsend.”

She says that they help give her life routine and they don’t even mind (too much) on days that she can only manage a short or a slow walk. And Linsey agreed that her cat offered her peace and comfort as she sat with her through the hardest of days.

Stephanie was even clearer: “I couldn’t go on without our pets. They give me reason to get up in the day and are there for me to cry on and talk to. They sleep with me giving me warmth and comfort when I can’t sleep. They give me focus away from my symptoms and all the problems I have with ME/CFS”.

M.E. is an invisible condition. Often, even the people who know you best, can’t tell quite how bad you feel. But, people with M.E. tell us, their pets seem to have a sixth sense of how unwell they are at any given time.

Libby says that her pet can sense when she’s crashing. And WB says that her Jack Russell can tell when she’s severely ill and refuses to leave her – he just lies down at her side. Lucy told us how her dog Barney probably knew she was ill before she did, and that since then he has adapted his behaviour – so that he never pulls on his lead anymore.

M.E. can be an isolating illness. Many people struggle to face the outside world – noise, light, heat, smells, and lots of people, can all increase symptoms to unbearable levels. Susan says that her Teddybear has also been her antidepressant, and helps to alleviate her loneliness. And Lois said that for her it was the companionship and structure of regular feeds, that helped remind her to look after herself as well.

ME is a punishing illness. Sometimes it pushes us too far. Many people get depressed because of the constant pain, the inability to think clearly, and the way it cruelly saps all energy. There have even been examples where dogs have brought their owners back from the brink…

Sarah wrote, “I was at a very low ebb a few years ago and I was very close to taking my own life.

“My CFS/ME was really bad, my best friend had died, and I felt bereft. But the love and companionship of my darling dog Poppy kept me going.

“She was ill with heart failure and I made her a promise to stay alive to care for her. I had to keep going then.

“I firmly believe she saved my life and the love we had for each other makes me smile still.”

Dogs can help in so many ways. Tracy tells us how she is now thinking of training her dog to be an assistance dog to help her on days when even getting out of bed can be a struggle.

Other people with M.E. struggle to keep their pets – whether for financial or physical reasons – and this can be a heart wrenching experience. Stevie told us that there were times that his Dalmatian, Bones, couldn’t live with him as it wasn’t fair, but thankfully he’s now back and they are fighting the illness together. While Karen told us that she had to put her dog into day-care because she couldn’t care for him anymore.

For some though, owning a pet remains a dream. They simply don’t have the resources to be able to care for them properly. Jenny said that she would love to have a cat, “but it’s all I can do to look after myself”. And as our own Russell Fleming freely admits, he dreams of the day when he might again own and train a couple of Labradors.

There are many therapies that people with M.E. have tried, but most don’t even come close to helping them deal with all the symptoms that make their lives a misery. There is, as yet, no known cure for M.E., but in the meantime, as Steve succinctly put it, “Dogs are the best therapy there is.”

My own family wouldn’t be in the shape it is today without our dogs. We couldn’t have coped with M.E. nearly so well had we not had them. Now, for the first time in his life, after the death of his good friend Bud, Neo is our only dog.

He’s having to grow into a new role, to look after us all on his own. He’s listening more attentively to his training, and he’s shadowing us more closely too – as if he feels responsible for our welfare.

Neo, is a naturally timid dog, so we’re working with him, steadily and patiently, to take him out of his comfort zone and build up greater trust – so he knows that he’ll be OK so long as we’re with him. 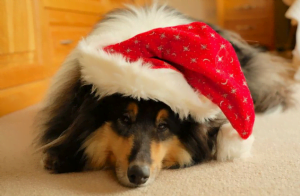 The Glasgow Santa Dash on 10th December, is the culmination of that training.

It will be his first public appearance as Fundraising Dog for the ME Association.

Neo’s doing this, because he can – on behalf of all those who can’t, but who would dearly love to.

Neo’s doing it because people with M.E. need ongoing support – from friends, from family, from pets and from the ME Association.

Please give any pennies you can spare in support of Neo’s Santa Dash for The ME Association.