Stanford: Scientist searches for answer to his son’s devastating condition

As a renowned Stanford scientist, Ron Davis has a deep appreciation for the power of modern medicine. And yet an explanation for the disease afflicting his own beloved son eludes him.

Son Whitney, 33, suffers from such severe Chronic Fatigue Syndrome that he is bedridden, unable to eat or speak. The handsome man was once a photographer and adventurer. He traveled through the United States, studied Buddhism in India and Nepal, lived in an Ecuadorian rainforest and ran a campaign office for former president Barack Obama. Now he’s returned home to Palo Alto for 24-hour care.

So his father has set out to find the reason behind his mysterious condition — believed to affect 2 million Americans — convinced that science has an answer, and that knowledge will lead to a cure. He is also giving new hope to others.

“To have people like Dr. Davis who are studying it and looking for answers — it is huge,” said Lorene Irizary of Sonoma, sick for 22 years, a former Sonoma County official who is now a patient at Stanford. She arrived in a wheelchair. “I’ve tried so hard to find answers. To be here with the researchers and the doctors and see it all together – It is really amazing.”

On Saturday, at a Stanford symposium organized by Davis, patients and top scientists gathered to share their insights into the condition, also called myalgic encephalomyelitis or ME/CFS. About 300 people attended the conference and another 1,000 watched it online. 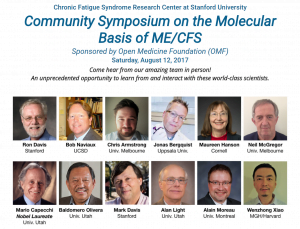 This is what we know, so far: When people encounter a major stress in life, such as an infection, environmental toxin, trauma or physical shock, the body hits the “pause” button — briefly.  This is a normal; it’s nature’s way of keeping us alive, during times of trial.

Most of us bounce back. While we all feel exhausted after a setback — say, the flu or mononucleosis — we eventually recover. But some don’t. Their debilitation persists.

“Basically it’s a shutdown of the body,” said Davis. “It doesn’t reactivate.”

“If you have mono or influenza, once the viral infection is gone you don’t feel very well. You feel totally exhausted and miserable. That is what these patients feel all the time — year after year after years.”

At the symposium, scientists agreed that multiple studies have failed to find a single underlying anomaly for the disease. And patients with similar onsets have different longterm outcomes.

But biological patterns are emerging. Scientists are studying the unique chemical fingerprints that specific cellular processes and life’s molecular machinery leave behind – and see clues.

Immune system T cells are using significantly less of their respiratory capacity, they reported. They’ve seen metabolites that are consistent with enhanced inflammation and reduced recovery. There also are disturbances in the body’s pathways for fat, lipid, sugar and energy metabolism.

One scientist reported that seven underlying genetic “cluster issues” have been identified, perhaps predisposing them to illness.

For Whitney, the illness followed a bad case of mononucleosis, then a spell of headaches and dizziness after a college trip to Jamaica. He sickened while in India, then later caught a severe cold when back home — and never returned to health.

It’s a frustration for Davis, 76, who is also  professor of biochemistry and of genetics with a degree from Caltech, postdoctoral training at Harvard, and 30 biotechnology patents to his name. Named one of the world’s greatest innovators by The Atlantic magazine, he developed a technique which led to the discovery of RNA splicing and also helped find a way to join DNA fragments.

But he knows his efforts are opening a door to a new frontier of research into a disease that was once thought merely psychological — where scientists can look beyond the vast spectrum of ailments.

After the conference, Davis would end his day like all others: going home, opening the door to Whitney’s dark room, and start an intravenous solution to provide food and hydration.

“I think we can figure this out and cure it.  I am optimistic,” he said. “People recover. It is not something that is intractable.”

To learn more about the Community Symposium on the Molecular Basis of ME/CFS, to watch the livestream recording again, or to order a DVD of proceedings, go to: www.omf.ngo and https://www.omf.ngo/community- symposium/