A community symposium with world researchers of one of the world’s most puzzling diseases will take place at Stanford University on Aug. 12. Scientists will meet with the public to discuss the latest findings on Myalgic Encephalomyelitis/Chronic Fatigue Syndrome (ME/CFS). 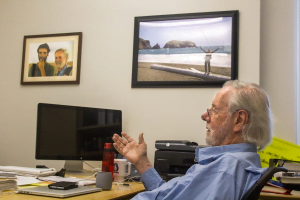 The public event caps a three-day symposium of the scientists and includes three Nobel laureates and six National Academy of Science members who are experts in the field. The Open Medicine Foundation is hosting the event.

ME/CFS has been one of Davis’ biggest challenges

Walls in the Stanford Genome Center’s reception area are covered with patent approvals bestowed on Davis and his colleagues for their innovative work related to genomics, developing novel devices and molecular discoveries and processes. But working on ME/CFS has been one of Davis’ biggest challenges — and one that has struck straight to his heart.

Davis’s adult son, Whitney Dafoe, who as a severe case of ME/CFS, lies pretty much motionless in his bed in his parents’ Palo Alto home. The window shades are drawn to keep light from overstimulating him and Dafoe can no longer speak or write. He receives his specially prepared food, pureed and partially digested, through a feeding tube in his stomach; a tube delivers fluids directly to his heart.

Davis, who is also director of the The Chronic Fatigue Syndrome Research Center, has spent the last few years trying to identify the cause of his son’s devastating condition, which, he estimated, afflicts as many as 3 million people in the U.S.

The illness saps all of its victims’ strength as well as having many impacts on the body’s systems. The least exertion for many patients can lead to a cascading crash; and each episode brings less and less ability to recover, Davis said.

But there is hope in the tiny blood samples Davis and his colleagues have extracted from patients and healthy control subjects. The research team has found evidence that there is a molecular and metabolic basis to the disease.

They have also developed groundbreaking, inexpensive technologies capable of conducting fast drug screenings and evaluating hundreds of metabolites — substances that are formed in or are necessary for metabolism.

Using blood samples from his son, Davis had Metabolon, a clinical metabolomics diagnostic company, measure hundreds of metabolites in search of anomalies. When Davis received the results, it took him about 15 seconds to understand much more about the disease, he said.

An image of the wide array of metabolites to the uninitiated has all of the complexity of searching the stars in a miniature solar system. But Davis has color-coded the metabolites that are abnormally low and those that are high.

“You can see an awful lot of blue and red. That’s pretty clear there’s a metabolic problem going on. You can also see a lot more blue than red.

That means it’s a hypometabolic disease — a disease of things that are low. That’s what I could see in the first 15 seconds,” he said.

A portion of the citric acid cycle, molecules necessary for energy production, jumped out. They were “very, very low,” he noted.

“This is the cycle that generates almost all of the energy for a person,” he said.

“ATP is the gasoline of the body. The molecule allows energy to be consumed in your body,” he said, noting it is necessary for movements such as muscle contractions.

Something in ME/CFS patients appears to shut down these necessary processes, he said. It appears that the pathway leading up to the citric acid cycle is somehow shut.

Davis’ nanodevices, tiny computer chips, have a small channel where scientists can deposit about one-tenth of a drop of blood. That’s all that is needed for the assay, or investigative analysis, he said.

The nanodevice has 2,500 electrodes. Each electrode is sampled 100 times per second, generating a tremendous amount of data.

Davis and his team introduced electrical impulses to both cells and blood serum (a protein-rich liquid that separates out when blood coagulates), taken from both ME/CFS patients and healthy controls.

The patients’ serum had a very different response from that of healthy subjects. The cells themselves did not seem to have any defects, only the serum that came from the cells. All of the samples from the ME/CFS patients behaved the same way and all of the healthy controls did not deviate from their cell reactions, he said.

But why do the processes switch off in the patient’s cells?

Scientists haven’t figured that out yet. But Davis and his team have been testing compounds that seem to switch on the shut-down citric acid cycle.

Two substances — pyruvate and ATP — have been capable of making the cells function properly again. But much more testing must be done, he said.

Davis cautioned that patients should not go rushing out in hopes of being cured if they take the substances. Pyruvate in high doses can cause intestinal problems and diarrhea, and a drug, an antiviral called rituximab, doesn’t work for everyone, although it does work for some patients.

Rituximab hasn’t helped Dafoe; in fact, he got worse that year, Davis said. It’s a cautionary tale indicative of the complexity of the human body.

Scientists have some theories about why the metabolic sequence in a ME/CFS patient might turn off. Robert Naviaux, a University of California, San Diego expert in mitochondrial DNA and metabolism who will also speak at the community symposium, theorizes that the switch-off mechanism could be a “danger response.”

ME/CFS is a metabolic state designed to protect the body during a viral infection, for example, but for some reason it doesn’t get turned back on after the infection has gone away.

Davis and his colleagues are working to speed up research, which could have advantages for other diseases as well. They have developed much cheaper devices that can help speed up analytical processing.

Rahim Esfandyarpour, an engineering research assistant, developed a chip that can be printed with silver nanoparticles on a piece of plastic using a regular inkjet printer. It costs about 1 cent per chip.

Another device, magnetic levitation, separates cells out based on their magnetic properties. Researchers and diagnosticians can separate out cancer tumor cells, for example. The device fits on an iPhone and costs about 5 cents per assay.

Davis said the technology he and his team have developed will likely be useful for diseases such as Lyme disease and fibromyalgia. Some applications might be helpful for speeding drug testing on cancers.

Time is a critical element for Davis, whose once-vibrant son has been bedridden for years and who is getting worse. The cost, he said, is also crucial.

But he recently hit a roadblock. The National Institutes of Health, the federal agency that supplies much of researchers’ grant funding, pulled the research grant his lab had for 27 years to develop the devices that will speed up research and make some of it inexpensive.

“Trying to reduce the cost of health care is not our priority,” an NIH official told him, Davis recalled. The grant ended officially on Tuesday.

Davis is now seeking private funding. He estimated he needs about $5 million to gear up enough people to analyze data the devices have already generated, and he needs to bring in post-doctoral researchers who would want enough funding to stick around for a few years.

Community Symposium on the Molecular Basis of ME/CFS

Anyone who wants to attend the community forum on Saturday, August 12th can register online to watch it for free via livestreaming. It will run from 5pm, Aug.12 to 1am, Aug. 13, UK time.

“This exciting symposium will follow a 2-day meeting of our collaborative team of world-renowned scientists.”