We recently published a comprehensive review of the large cytokine study from Prof. Jose Montoya and colleagues at Stanford. This review of Clark et al. relates to a much smaller UK study, that set out with very good intentions but encountered difficulties processing samples which some have said should have resulted in the paper not being published.

As Charlotte said in our previous review:

However, the Clark study has been criticised for its poor execution and scientific errors, such as dividing the samples into batches that were looked at years apart by different lab technicians! It would have been far more useful if this study had not been published, but had been repeated once the problems had been identified and corrected – enabling more accurate conclusions to be reached.”

In this review of the UK study, we would like to introduce Dr Barbara De Barros who is a doctor specialising in infectious disease, and who is researching the Zika virus with colleagues at the London School of Hygiene and Tropical Medicine where she developed an interest in ME/CFS and came into contact with Dr Luis Nacul who is head of the UK ME/CFS Biobank team, and with whom she is currently working on a dissertation.

“Back in Brazil I was working as a MD, had my private office, worked with the justice department with HIV/AIDS disability and in an emergency department. Nowadays, I want to get more involved with research, if I can stay a little longer in the UK.” She is currently working on another project for the ME Association – the details of which will be announced in due course – but has kindly made herself available for research reviews.

Unlike Charlotte, Barbara is of the opinion that the Clark et al. study should have been published, “I always think it is good to publish papers with negative results so other researchers can learn from them, avoiding repeating the same mistakes,” she said – see below.

The immune system is a complex network designed to protect us from both external (e.g. infections) and internal threats (e.g. malignant gene mutation). 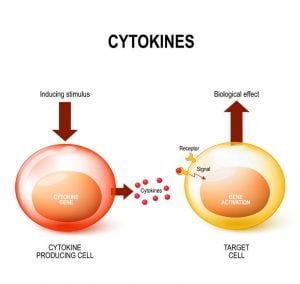 Chronic Fatigue Syndrome (CFS) is an established condition of chronic and disabling fatigue which is not caused by an obvious medical disease or psychiatric illness. The causes of CFS are still a mystery and there are no markers to help diagnosis.

Groups of researchers are looking into abnormal regulation of cytokines as being part of the pathophysiology (the cause, or part of the process) of CFS. Previous studies have shown changes in the serum levels of a few cytokines at rest and after exercise in CFS patients compared to healthy individuals.

⇒ See also: MEA Summary Review: Cytokine signature associated with disease severity in ME/CFS, published, 18 August, 2017, for more of an overview about cytokines and how they may play a role in this disease.

The aim of this study was to test the hypothesis that cytokines are excessively expressed (concentrations are higher in the blood) as a response to physical activity in patients suffering from CFS. Other hypotheses posited by the authors were as follows:

Because cytokines can be active or not active, or linked with platelets, for better accuracy RNA of these cytokines were measured. RNA is a genetic material, like a recipe, and it comes from a part of our DNA, and with that our cells know what to produce depending on the type of cell and what we need from it.

Therefore, if the cell is producing more cytokine, there will be more RNA of that cytokine around. It doesn’t matter if the cytokine is linked with something or active or inside or outside the cell.

The problem is that some laboratory tests can measure active cytokines differently. For example: TGF-β is a cytokine linked with platelets, and depending on the speed and time of centrifuge, it changes the concentration of TGF-β, and can change the result of the test.

The group of CFS patients were selected from consecutive new adult (aged 16-65) outpatient attenders at the CFS clinics at St. Bartholomew’s and the Royal Free hospitals in London.

Inclusion criteria: Patients with CFS diagnosed by Centers for Disease Control (CDC) (international) criteria, with the modification of not having any concurrent co-morbid psychiatric disorder:

The control group were 21 healthy but sedentary volunteers (engaging in moderate-intensity exercise or physical activity, for 20 minutes in a single episode, less than once a week). The group matched controls by age, sex, body mass index (BMI), and distance they lived from the hospital.

They were recruited through CFS patients and patient groups (healthy but sedentary friends or relatives that were not blood relatives), hospitals and medical schools (employees or their friends or family), and people living or working locally.

It was a 16-day study whereby participants (both patients and controls) attended the hospital on four occasions, with blood samples taken over a 9-day period from day 7 to day 16. A baseline assessment on day 1 mainly comprised obtaining written informed consent, and self-completion of questionnaires.

A commuting challenge was completed on day 7, which included the participant having blood drawn at home after a night’s sleep/rest, before they rose from their bed. Another blood sample was taken when they arrived at the hospital. An aerobic exercise challenge was completed on day 14. On this day blood was drawn before, immediately after, and 3 hours after exercise. On day 16 a final sample was taken at the hospital and follow-up questionnaires were administered.

A total of 24 patients (cases) and 21 controls were recruited into the study. Gender, age, smoking status, distance they lived from the hospital, amount of physical activity they undertook and time spent sitting were not significantly different between the groups.

There were no statistical differences in the use of antidepressants, antihistamines, oral contraceptive pill and thyroxine, but cases were generally more likely to be taking vitamins, minerals or other complementary and alternative medicines (CAMs) and spent more time in bed each night.

There was no significant difference between groups in the number of detectable versus undetectable levels in any of the cytokines (in analysis of the proteins or RNA results).

The researchers concluded that they could replicate the finding of consistently higher circulating TGF-β at rest in cases of CFS compared to healthy controls, but deeper analysis showed this to be a spurious finding, due to laboratory variation between different assay batches.

Post-exertional symptoms and perception of effort with exercise were not associated with an increase in circulating cytokine protein or RNA concentrations in patients with CFS.

A failure to replicate?

This result contradicts the authors previously published pilot study which also examined cytokine expression before and after physical exertion, although they don’t seem to have any particular concerns in drawing this latest conclusion despite the processing problems.

However, we must surely question just how seriously we can take these recent findings in light of the processing errors and following other cytokine studies in ME/CFS, including the more recent and larger study from Stanford.

If you have found this information useful, then please donate – whatever you can afford – to help us continue with our work and make the UK a better place for people with ME/CFS. Just click the button below:

Or why not join the ME Association as a member and become part of our community?
For a monthly (or annual) payment you will not only be helping to keep us doing what we do best, but you will receive ME Essential magazine – with exclusive content – delivered straight to your door.