This was the main finding from an online study that compared people with ME/CFS with those suffering from multiple sclerosis – a disease that shares an overlap of several common symptoms including fatigue, and can be hard to distinguish, particularly at onset and prior to more thorough investigations.

It was a comparison study that recruited participants online and then asked them to complete the SF-36 – a questionnaire which measures physical function – and the more thorough DePaul Symptom Questionnaire (DPS).

People with ME/CFS were assessed against Fukuda and Canadian Criteria, but as this was a self-report and online study, no participant was assessed by a suitably qualified and experienced physician.

The study’s limitations were acknowledged by the authors in the full paper but even so, the results provide an illuminating comparison with a more accepted neurological – and autoimmune – disease.

Multiple Sclerosis (MS), Myalgic Encephalomyelitis (ME), and Chronic Fatigue syndrome are debilitating chronic illnesses, with some overlapping symptoms. However, few studies have compared and contrasted symptom and disability profiles for these illnesses for the purpose of further differentiating them.

Table 2 (below) demonstrates SF-36 mean score comparisons between the two groups – the lower the score the greater the functional limitation. 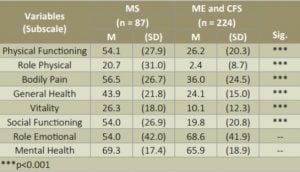 It shows that people with ME or CFS were significantly more disabled in terms of functional ability while at the same time showing little difference in role emotional or mental health, compared to people with multiple sclerosis. “This suggests that with a great illness burden, and continuing skepticism about the legitimacy of ME and CFS, those with this illness tend to be functioning relatively well on mental health related indices.”

The ME Association fully endorses the DePaul Symptom Questionnaire not least because it is one of the few validated tools specifically tailored to ME/CFS. If you have not seen the DPS before, then Table 3 – reproduced below – will let you see just how valuable this tool can be.

The following Table illustrates the mean scores against an extensive list of symptoms using the DPS. With this tool, it is the higher score that equates to greater symptom severity. 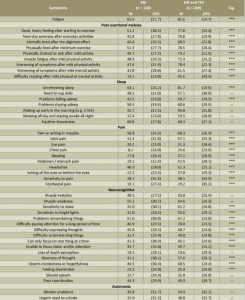 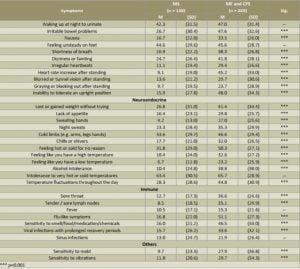 “Similar to the SF-36 data, those in the ME and CFS group were significantly more symptomatic on almost all variables. In comparison to the MS group, the ME and CFS group had significantly worse functioning on the fatigue item, all 9 post-exertional malaise items, 2 sleep items, all 10 pain items, 11 neurocognitive items, 9 autonomic items, 11 neuroendocrine items, 5 immune items, and both of the 2 other items.”

“For those symptoms without significant differences across groups, the ME and CFS group had scores that trended toward more severity than the MS group. This was the case for all items except the following 4 symptoms: daytime drowsiness, muscle twitches, bladder problems, and urgent need to urinate.”

In summary, it is apparent that both patient groups have many serious symptoms and functional limitations. This has epidemiologic significance, as both illnesses affect many Americans, with CFS prevalence rates of 0.42% versus MS rates of 0.09%; [12].

In addition, some patients have both sets of symptoms, with some estimating that 14% of patients with MS [29] have the CFS Fukuda et al. [18] symptoms. However, these are distinct illnesses, as MS represents an exclusionary illness for a CFS diagnosis.

The finding that ME and CFS group had more functional limitations and more serious symptoms than those with MS provides additional evidence to the seriousness of ME and CFS.

Continued research to further compare ME and CFS with other chronic conditions can inform improved methods for differentiating the conditions for the purpose of diagnoses, treatment, and understanding etiology.

You can access the full paper – for free – here.