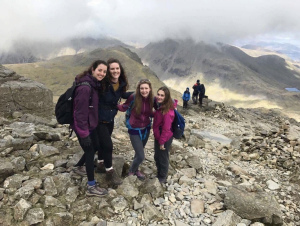 A teenager from Wetherby in West Yorkshire climbed England’s highest mountain this week – a few years after chronic illness meant she couldn’t walk her dog to the end of the road without feeling exhausted.

Sophie Atkinson and three friends from Harrogate College scaled Scafell Pike to raise money for the ME Association.

The 19-year-old was diagnosed with ME after suffering from glandular fever five years ago.

With friends Sarah Murphy, Lauryn Brogatzki and Rheanna Ainsley, they reached the top.

“I did it!!! We climbed Scafell Pike! I can’t quite believe it!”, said an exultant Sophie afterwards.

“It was very cold and extremely tiring but I had best day and really did enjoy myself. Me and my friends had such a laugh and have made such an amazing memory.”

Sophie’s illness meant that she missed a lot of school, forcing her to drop some of her GCSEs. She is now taking an extra A-level, after taking two last year, and hopes to start university in September and train as a midwife.

Before she went, she told our press officer Sarah Staples:

“In the early days of my illness, I remember walking the dog to the end of the road and thinking: “I can’t do this.” I was wiped out, I had to go home.”

With ME, it’s not just the extreme tiredness – there were night sweats, brain fog – where you just can’t concentrate – and muscle aches.

“As a teenager, probably the hardest thing was that my friends would be out, being normal teenagers, and I’d be at home, seeing what they were doing on social media. That was really tough.”

If you would like to support Sophie’s fabulous effort, please visit her fundraising page at www.justgiving.com/fundraising/ScafellPikeClimbForME 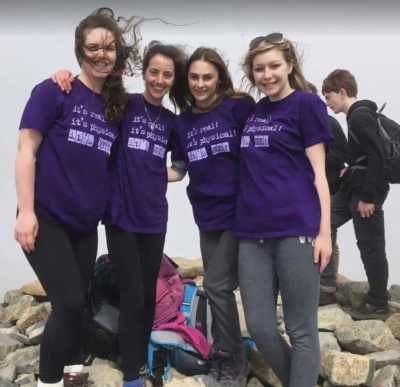