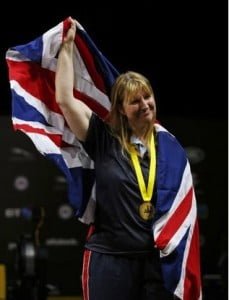 Sam Livy (pictured) went to the inaugural Invictus Games as an archer – and left them as a double rowing champion.

And there was plenty of success for Bath swimmer Luke Reeson to enjoy as he won five medals, including relay gold, at the inspirational event for wounded, injured or sick military personnel.

MOD civilian worker Livy, who was diagnosed with ME 12 years ago and started training with Bath Archers in April, reached the quarter-finals of the mixed recurve competition where she lost 6-0 to number one seed Gary Prout.

But her involvement in the Invictus Games, backed by Prince Harry and presented by Jaguar Land Rover, didn’t stop there as she then accepted a late offer to join Great Britain’s indoor rowing team.

And it was a decision that would prove triumphant as Livy took home gold in the team and individual women’s IR5 sprint on Saturday – rowing 279m in one minute.

“Rowing was the sport I had to give up when I became ill and when they put out a shout for more women rowers, I couldn’t resist,” she said.

“It was a total shock that I managed to medal. I hopped on the ergo and didn’t do too well in the endurance but I’m still good for a sprint.

“I’m paying for it now with my health – face, throat and glands all swollen up like a puffa fish, muscle and joint pain, banging headache and feeling like I ran 10,000 miles without stopping – but it was worth it to come home with two gold medals.

“However, I now know why I like archery so much. To anyone with ME, I’d encourage them to try archery because it’s really accessible to a whole range of disabilities.”

Meanwhile, Reeson – a Corporal in the 1st Battalion of the Duke of Lancaster’s Regiment – had to wait until Sunday before finally taking to the water at the London Aquatics Centre.

But it was well worth the wait as he won two bronze, two silver and was part of the victorious mixed 4x50m freestyle relay team.

“I entered every event I could,” Reeson said. “It was about four or five months after [I suffered my injuries] I started swimming. I’ve been doing a lot of distance swimming and just done Ironman UK

“The atmosphere was unbelievable – doing that relay, the noise was deafening and it was amazing so thanks to everyone who came.”

Jaguar Land Rover is proud to be the presenting partner of the Invictus Games, the international sporting competition for wounded, injured and sick Service personnel. For more information, visit www.jaguar.com and www.landrover.com.