He’s been threatened, his home has been attacked, and he lives in fear of going to jail for possession of cannabis.

But he says he has no choice.

He suffers from ME, or Chronic Fatigue Syndrome, and he spoke exclusively with ITV News Central to describe how being denied legal cannabis-based medication has meant he is forced to turn to the streets for his pain relief.

It comes as the government’s Crime Prevention Minister called for medicinal cannabis to be legalised – telling ITV News Central he believes it is wrong to deny people a product which could help.

Home Office Minister Norman Baker told ITV News Central that he had spoken to people suffering from conditions including cancer, epilepsy, and multiple sclerosis who all said they used cannabis as they could not find any other medication which worked.

He said he had written to the Department of Health to ask them to consider the issue, and wanted a cross-party review:

It’s been quite clear to me for some time, as the government’s drugs minister, that there is a case for making available more easily cannabis-based products to help particular medicinal conditions.

I think it’s wrong that we’re actually preventing people having access to something which will help their health, and in the process potentially criminalising them for obtaining it.

The ME patient, who struggles to walk much of the time, told ITV News Central he has repeatedly tried – and failed – to get his local NHS trust to pay for Sativex, which is the government’s first legal, licensed cannabis-based medication.

So now, he said, he regularly has to trawl the back streets of Birmingham and deal with violent crooks to get something which helps.

I have to go crawling the back streets late at night, dealing with gangs to buy small bags of weed off them. And sometimes it’s not very nice, and I get very very scared and feel intimidated.

I do feel awful about the illegal side of it, and I worry about it all the time, because it’s not nice to be breaking the law. But what choice do you have when you’re so ill?

I don’t know what magic ingredient there is in cannabis, but it’s how I get through my day. And just trying to survive and manage my illness makes me a criminal. It’s absolutely absurd. 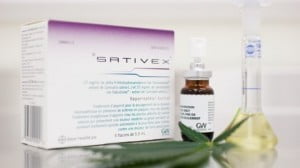 While Sativex is usually prescribed for people with multiple sclerosis, health bosses have said it can be used for other conditions including ME – but only if local NHS trusts decide to fund it.

A spokesman for Birmingham CrossCity Clinical Commissioning Group said they could not comment specifically on individual cases, but added:

Sativex is not routinely commissioned for the treatment of ME, however clinicians can apply for funding of a treatment if they can demonstrate exceptional medical circumstances for a patient.

A Home Office spokeswoman said there were “no plans” to review how cannabis is classified.

This government has no plans to legalise cannabis or to soften our approach to its use as a medicine.

A Home Office spokeswoman said there were “no plans” to review how cannabis is classified.

This government has no plans to legalise cannabis or to soften our approach to its use as a medicine.

There is clear scientific and medical evidence that cannabis is a harmful drug which can damage people’s mental and physical health.

Our cross-government strategy on drugs remains clear. We must prevent drug use in our communities, support users through treatment and wider recovery and ensure law enforcement agencies tackle the organised criminals behind the drugs trade.

And a spokeswoman for the MHRA – the body responsible for licensing new medicines – said they could not confirm or deny whether there were any other applications in place for cannabis-based medication due to “commercial sensitivity”.