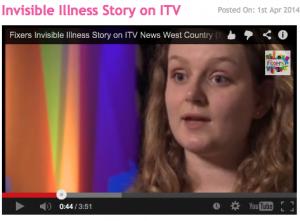 Lindsey Shorter, a 21-year-old who has been ill with M.E. for the past seven years, was interviewed today about the impact the illness has had on her life by Jill Misson, covering for Anna King, on the BBC Radio Gloucestershire lunchtime show.

Lindsey is studying English Literature at the University of Gloucestershire in Cheltenham and hopes to become a journalist. She says she tries to stay positive in outlook and not brood over the restrictions that M.E. places on her life. To give added focus to her life, she has joined the ‘Fixers UK’ organisation in order to campaign on behalf of people with invisible, long-term illnesses.

Later in the programme, presenter Jill Misson called up ME Association medical adviser Dr Charles Shepherd to talk through some of the issues raised by Lindsey.

The programme is available to listen again on the BBC iPlayer for the next seven days.

The interview with Lindsey begins 11.19 minutes into the programme and lasts for eight minutes.

The interview with Dr Shepherd begins at 43.40 minutes and also lasts for about eight minutes.

Fixers UK made a video of Lindsey for her awareness campaign that was broadcast on ITV News West Country in April. It can be found HERE.