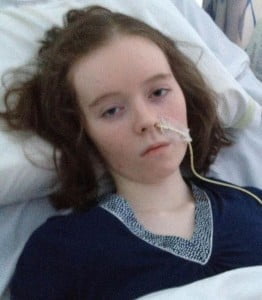 Jessica Taylor was struck down by a deadly virus when she was just 14, which attacked her immune system and left her with Myalgic encephalomyelitis (ME).

Ms Taylor, now 23, spent nine years building up her strength – and her hard work finally paid off at the end of June.

She said: “I had been pushing for this moment for nine years.

“I have spent almost a decade in bed, there have been times when I couldn’t move and have been fed through a tube.

“Walking was just a dream but now it’s a reality.

“As I stood up I realised I was I had grown by four inches too.”

Although she only managed three steps, Ms Taylor, from Rochester, Kent, is continuing to improve.

She added: “I’ve missed out on all my teenage years, that’s the hardest part of having this condition.

“Shopping with friends and clubbing until the early morning is something I could only dream of doing.

“But with my latest development, I’m hopeful that one day I’ll lead a normal life.”

Before she was struck down, Ms Taylor enjoyed a life like every other teenager and loved socialising with her friends.

But she was left so weak that she was unable to even lift her head, meaning she had to be fed through a tube.

She said: “Since that moment my life has been an emotional rollercoaster for me and my family.

“It was a shock for everyone, I had gone from being an outgoing person to not being able to get out of bed.

“Everything changed, now the slightest infection can leave me fighting for my life.”

But Ms Taylor, who lives with her mother, Kate, 50, father, Colin, 52, and sister, Ruby, 19, is determined to continue with her progress.

vShe said: “I heard of many miracle stories whereby people walk again but I never thought it would happen it me. “I’m so proud of myself and all the hard work I put in to make my dream a reality.”

Ms Taylor spent 16 weeks staying at the Burrswood Centre in Kent, which specialises in helping those with ME, where she underwent physiotherapy and hydrotherapy.

She said: “It was exhausting trying to build my muscles back up.

“It was all so worthwhile when I saw the look on my parents faces when I stood up and was able to take those few steps. They were so happy.

“Now I’ve managed to get out of bed the key is to keep on building up my muscles so I can walk for longer.”

She is now back home and making good progress.

Despite her condition, brave Ms Taylor even set up a website, called Share a Star, to help sick children and adults.

She said: I set up the charity from my bed to help those in a similar position to myself.

“I wanted to help others feel special, it also gave me something positive to focus on.”

She has been praised by the ME Association for her work.

“This is a lovely story and we wish Jessica Taylor all the best in her recovery.

“But M.E. affects about 250,000 children and adults in the UK – many of whom can only hope and pray that they too will one day be able to receive the same kind of attention that she received through her stay at this private hospital.

“For vast numbers of severe sufferers, though, the reality is that they languish disbelieved and untreated because the NHS doesn’t provide the care and understanding that people with this illness need to overcome its worst effects. They remain isolated and cut off from the rest of society because they are often too ill to leave their homes, they become bed bound and – in the worst cases – need to be fed by tube.

“Researchers are beginning get to grips with the causes of M.E., which can affect all bodily systems. The day when there are widely available treatments and perhaps even a cure can’t come too soon.”

And Jessica appeared in the BBC News South East on August. Watch the interview on the BBC iPlayer for the next seven days HERE. The interview begins 13 minutes in.