Her parents, Jane and Jim, wish for it to be a private ceremony but say, “ We know that people will be thinking about Emily and holding her in their hearts as they are so touchingly doing at the moment.”

As many people will want to pay tribute to Emily, the following suggestions for a virtual funeral have been put forward by some of her friends and approved by her parents:

1) Light a candle at some point on the day of the funeral. For those too ill to tolerate candlelight, a picture of a candle could be looked at instead, or a candle simply imagined.

2) Read, or have read to you, some of the pieces below. In the first Emily’s mother, Jane, shares her memories of Emily. Two quotes have also been chosen as reflecting Emily’s spirit. All can be found below.

As Emily was a dedicated campaigner, we also suggest the following as a means of raising awareness of ME:

3) Change your Facebook profile photo (and cover photo if you are on Timeline) to the rose picture below. This can be done on the day of the funeral or before. A suggested caption for the photo is: ‘In memory of Emily Collingridge’ with the web link: www.severeme.info/about-emily.html (If you are unable to copy the rose picture from this page, it can also be found at: http://bit.ly/RPeahY To add a caption, go to your profile picture and click where it says ‘Edit’)

4) Share on your Facebook profile the Guardian article about Emily. This has been chosen because it gives a good overview of severe ME, and includes links to the moving piece “Emily’s Appeal” that Emily wrote last year, as well as a link to the website of her book. www.guardian.co.uk/commentisfree/2012/mar/30/me-emily-collingridge-chronic-fatigue-syndrome Remember that people are more likely to read it if you include a short message explaining its importance to you.

5) Donate a copy of Emily’s acclaimed book, Severe ME/CFS: A Guide to Living, to your local library, hospital, doctor’s surgery, or anywhere else where it can help patients with severe ME and those involved in their care http://www.severeme.info

Jane and Jim request that no flowers be sent for the funeral. Donations in lieu of flowers, if desired, can be made to ME Research UK www.meresearch.org.uk either direct or through the funeral directors: Francis Chappell & Sons, 41 Sydenham Road, London, SE26 5EX 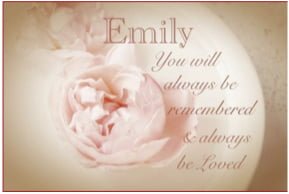 Jane shares her memories of Emily:

Emily was one of eleven babies born on a memorable and busy Good Friday at Dulwich Hospital in 1981. She came out looking rather squashed and for the first 24 hours slept peacefully leading to her father commenting on what a good baby she was. That didn’t last. For the next few years it was a question of ships that passed in the night as she toddled in to Mummy and Daddy’s bedroom and Colly decamped to her bed!

I think Emily was born organised and quite early on could show her baby sitters how to do up her nappies. From the age of three she was certainly bossing me about and I couldn’t argue as she always seemed to show a great deal more common sense than me. Of course she continued to boss me particularly in the wrapping of Christmas presents, an art she perfected one year when I was called away on an emergency and she wrapped sixty gifts in three days.

Emily was sensitive and shy by nature, but this did not stop her enthusiasm for participating in life. Visits to the Sooty show and the pantomime found her up on stage belting out a song completely out of tune. Much to my incomprehension, unlike me, she did not enjoy dancing classes (though she later loved visits to the ballet) and like me she was no good at most sports apart from a love of cycling and swimming shared with her father. However, she was an ardent tennis fan; this dated back to the day she was trying to spot Mummy and Daddy on the television among the Wimbledon crowds and started asking Gan Gan, her beloved grandmother, all about the game. She also fancied Jonny Wilkinson well before he became famous, but claimed that this had nothing to do with her interest in rugby. She did not miss one England game the year we won the world cup when her screams of excitement sent our Westie, Bella, into a whirl of barking.

Though she was forced to leave school at fourteen because of ill health, Emily’s interest in learning and an enormous variety of subjects was in no way diminished. She educated herself. She was an avid reader and her head was always buzzing with ideas and the next project she wished to tackle. Her way with words was evident in her writing and when talking (which she could do at length and non-stop!). Charity PR had been her chosen career when she was at school and so the opportunity to do this for an ME charity (with tremendous success) when her ME was less severe, though often from bed, was perfect. She later did paid work for Home-Start. Campaigning was in her heart, not only for better awareness of ME, but many other causes. She was highly principled and would always stand up for the underdog. With the publication of her guide to living with severe ME her desire to help others was partially realised when it was greeted with enthusiasm and sold internationally.

Emily was lucky to have many wonderful friends which she largely made through her work and the ME world. She missed her dear schoolfriend, Lydia, whom she regarded as a sister, as Lydia is married to an American and lives in Kansas, but they remained very close and though she sadly never met them in person, she adored Lydia’s children.

To laugh often and much; To win the respect of intelligent people and the affection of children; To earn the appreciation of honest critics and endure the betrayal of false friends; To appreciate beauty and to find the best in others; To leave the world a bit better, whether by a healthy child, a garden patch or a redeemed social condition; To know that even one life has breathed easier because you have lived. This is to have succeeded.