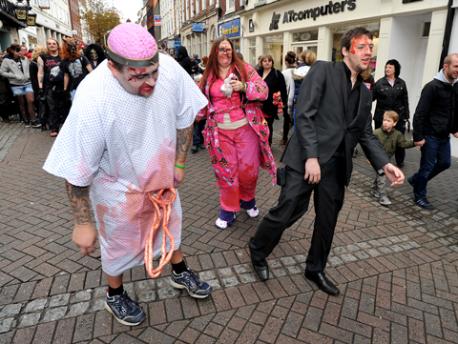 HORDES of the undead took to the streets of Worcester to scare unsuspecting passers by during the city’s annual Zombie Walk.

Shoppers looked on in horror as the risen dead – of all shapes and sizes – appeared on Broad Street shortly after noon.

The event, which raised money for ME sufferers, saw more than 100 zombies shuffling through the city in fantastically freakish outfits.

Tracey and Andy Monaghan, of the Arboretum, Worcester, organised the event.

“It is an important charity to us as I have ME,” said Mrs Monaghan. “It is quite fitting to have a zombie walk for ME because you feel like a zombie a lot of the time.

“We are hoping to raise a few hundred pounds with the walk, our Zombola and a horror film screening.

“There was a great turnout, we were really pleased with how many people came with their own make up and costumes – they looked great.”

One of the zombies, Adam Teague, has been taking part in Worcester zombie walks since they began in 2008.

He said: “It is great for people who love dressing up.

“It is a brilliant way to have a laugh and, of course, every penny goes to the charity.” (ME Association note: that’s us, by the way! Thanks to Tracey, the two Adams and all your supporters for helping us).