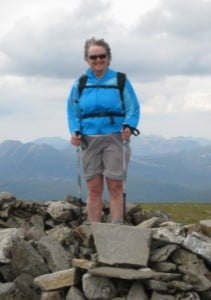 A Banchory pensioner who was diagnosed with the debilitating illness ME, has bagged her final Munro.

Elizabeth Culshaw, known as Liz, completed the last of the Munros on Tuesday, June 26.

Most of the summits were completed with husband David, between 1972 and 1990, but a period of illness for a time left completion in doubt.

Husband David said: “Liz suffered badly over a period of 10 years from ME (Myalgic Encephalopathy), but thanks to the wonderful care and support of the Banchory GPs, she was gradually able to resume leisure activities again, in particular her favourite pastimes of hillwalking and skiing.

“She then began to chip away at the remaining 30 or so summits, completing the Skye Munros over the last two years.

“This year saw five summits left, all in the Achnaschellach forest area.

The final two of these were completed with a trip from Craig, near Achneschellach, which involved a cycle of 6km, a walk taking in Sgurr Choinich and Sgurr A’ Chaorachain, (final summit) and a return cycle.”

David was able to accompany Liz on this trip – a trip completed just three weeks before the couple’s 40th wedding anniversary.

Munros are mountains over 3,000 feet in height. They are named after Sir Hugh T Munro who published his original list to the Scottish Mountaineering Club in 1891, which contained 283 separate 3,000 feet mountains.

Liz was helped greatly with some of the remoter hills and the Skye Munros by the couple’s daughters Gillian and Alison, who are both outdoor instructors.

David and Liz have lived in Banchory for 34 years.

“This story might encourage other people who suffer from ME and help them to realise that there is light at the end of the tunnel!”

it is currently estimated that some 250,000 people in Britain are affected by the illness.

All types of people at all ages are affected. Severe and debilitating fatigue, painful muscles and joints, disordered sleep, gastric disturbances, poor memory and concentration are commonplace.

In many cases, onset is linked to a viral infection. Other triggers may include an operation or an accident, although some people experience a slow, insidious onset.

There is currently no accepted cure and no universally effective treatment. Those treatments which have helped reduce particular symptoms in some people have, unfortunately, proved ineffective or even counter-productive in others.