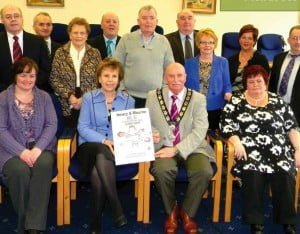 Members of Newry and Mourne ME/FMS Support Group were honoured with a civic reception given by the Lord Mayor of Newry, Councillor Charlie Casey, at the council headquarters in Monaghan Row yesterday (February 20). They used the occasion as an opportunity to bang the drum for a new alliance for people with ME/CFS in Northern Ireland.

“This event was a great opportunity to raise awareness and dispel misperceptions surrounding our illness”, said Mrs McParland. “As a direct result of the reception, we will shortly be meeting with members of The Health Committee to voice our concerns on the total lack of services for patients in Northern Ireland.”

The Newry and Mourne Group has also thrown its weight behind an event in Belfast on Thursday, March 1 – when New York-based physician Dr Derek Enlander will be speaking at the Lansdowne Court Hotel, 657 Antrim Road, Belfast BT15 4EF, at 7.30pm. Dr Enlander’s clinic at Mount Sinai Hospital specialises in research and treatment of Chronic Fatigue Syndrome and Fibromyalgia. Dr Enlander was born in Co Tyrone and trained in Belfast.