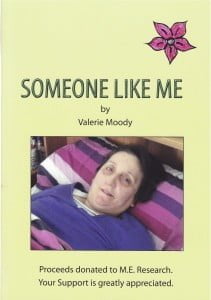 AN inspirational woman from the North West who has been confined to her bed for the last seven years with M.E. is launching a book of thoughts and prayers which she hopes will help others struggling with the same devastating condition.

Valerie Moody has endured unbearable pain without the strength to sit up, feed herself or even talk at times while suffering multiple seizures due to severe Myalgic Encephalomyelitis, known as M.E., and other associated conditions. Many of the years have been spent in a darkened room when she has been unable to stand sunlight or bright lights. Thankfully, however, Valerie has made some progress recently and has now written a book which she will launch at her St Johnston home this Saturday (June 18).

She explained: “I am taking this opportunity to raise much needed funds for M.E. research. I have decided to share some of my thoughts and prayers in the form of a book, entitled ‘Someone Like Me’. You could describe it as a book with a heavenly message for an earthly purpose. I started it one night when I was pretty sick and couldn’t get over to sleep. The pain was constant so, to distract myself, I started to write wee thoughts that came into my head and before I knew it I had four full pages, which I added to over the next few days along with sketches.”

Valerie, who belongs to St Johnston Presbytery, believes her faith has helped sustain her despite the difficult journey.

She said: “M.E. has had a lot of bad press. I am speaking up now because I have been in this situation for seven years and I feel if we all came together as one voice and made our situation known, based on science not opinion, we could raise awareness. The World Health Organisation (WHO) has acknowledged M.E. as a neurological condition. We want more information out there so we can be treated with dignity and respect. We need a clinic locally, manned by scientists and doctors who are in the middle of research. There is lots of modern technology available today so even people like myself who wouldn’t be able to travel to the clinic would still find it very useful.”

Valerie added: “I am just a single person trying to make a difference but my advice to anyone finding themselves in a situation like mine is that they should keep up their spirits because I think we are on the verge of a breakthrough.”

Valerie admits it hasn’t been easy being bed-bound for so many years – something of an understatement for the active farmer’s wife whose sons, John and David, were only 12 and 10 when she was first struck down. She said: “I think people who aren’t connected to someone with M.E. don’t realise how devastating it is on the body, it’s quite an insult for people to say it’s just a bit of tiredness, they only have to ask the family involved. When I lost the power of my body, I was robbed of everything except life itself really but I had to start to build up my life again with what I had. I know there are so many people like me who don’t have a voice, who don’t know where to turn, who don’t have anyone to turn to. Now that we have scientific evidence behind us we can stand together as one voice and raise awareness.”

Valerie’s book is called ‘Someone like Me’. To obtain this privately published book, send a cheque for £10 sterling (includes postage and packing) to Mrs Valerie Moody, Momeen Street, Johnston Lifford, Co Donegal, Ireland. Please make the cheque out to Valerie Moody.