On Sunday 24th March 2019, Andy Bob Beaumont will be taking to the stage for a Charity Day to raise funds for the ME Association. I can’t remember a time when Andy Beaumont hasn’t been fundraising for M.E.

He’s one of our fundraising legends and I can’t wait to finally meet him in person and hear his music first-hand. It’s going to be an amazing day of music, but a hugely emotional one too – given Andy’s strong connection to our charity.

And he won’t be alone. He’s persuaded his bands – The Scapegoats and The Beaumont Brothers – plus comediennes Sarah Lloyd and Nia Lloyd Williams, singer Magi Davies, guitarist AP Cooper and ukulele player Little Button to join him on stage.

This all takes place at Pie Records Art Cafe, Rhos-on-Sea in Llandrillo, Wales. It’s a spot we are told is fast becoming one of the premier live music venues between Chester and Dublin.

The event starts at 12.00 midday and running through the afternoon into late evening. Entry for the afternoon will by by donation, with ticket entry only after 6.00pm.

The whole aim of the day is to raise funds for, and awareness of, M.E.

All proceeds from the event and from the raffle on the day will be donated to the ME Association. For those who are unable to attend in person, the event is to be livestreamed.

Andy Bob Beaumont has been fundraising for M.E. Association since his wife, Kate, contracted M.E. in the late 1990’s and Andy has been her sole carer since then. He is passionate about raising funds to help people with M.E/CFS to understand and survive their illness. He began his fundraising by scaling all 190 of Wales’s Nuttall mountains (over 2000ft) but his fundraising now centres around his other passion – music.

Music has been an important part of Andy’s life since his teens – singing, playing guitar, writing songs and collaborating with other musicians. The roots of his music are in the Delta and country blues and his style has been influenced by artists and bands such as Dylan, Little Feat, Steely Dan, Elvis, Ry Cooder, J J Cale and Bonnie Raitt. His solo album of original songs – She Songs – was released in 2016 on the Turquoise Coal label.

Andy provides rhythm guitar and strong vocals to The Scapegoats – a four piece group that formed in the mid 1990’s. The group have produced three CD’s and are now working towards the release of a new EP in the summer.

He also makes up a third of the Beaumont Brothers – along with his brother Geoff and nephew ‘Honky Tonk Bob’.

All profits made from Andy’s live performances and recorded material are donated to the M.E. Association to help fund biomedical research into this awful illness. You can learn more about his work and support his fundraising by visiting his JustGiving page.

Not sure what you can do? 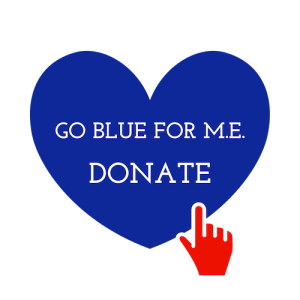 We recently launched our plans for ME Awareness Week. They included ideas for events you might like to host, and other ways in which you can help raise awareness during this special week.

Or you can get in touch with me – Helen Hyland – and we’ll work up some ideas together.

If you would like to help us make the UK a better place for people with M.E., then please make a donation – anything you can spare – to our ‘Go BLUE for ME – 2019‘ campaign.

Together we can make 2019 the best ME Awareness Week ever!