The words below come from the King’s College IOPPN website unless otherwise indicated.

“Our findings suggest that people who have an exaggerated immune response to a trigger may be more at risk of developing CFS.”

New research from King’s College London finds that an exaggerated immune response can trigger long-lasting fatigue, potentially explaining how chronic fatigue syndrome (CFS) begins. The study is the most in-depth biological investigation yet into the role of the immune system in lasting symptoms of fatigue.

CFS, also known as myalgic encephalomyelitis (ME), is a long-term illness which is characterised by extreme tiredness. The underlying biology of CFS has remained a mystery, hampering the search for treatments. There is some evidence that the immune system plays a role in triggering CFS and many patients report their illness starting with a challenge to the immune system such as a viral illness.

By the time patients are diagnosed it is too late to catch CFS in its earliest stages, and it is impossible to assess the biology of patients before the illness develops. To get around this problem, researchers from the Institute of Psychiatry, Psychology & Neuroscience (IoPPN) used a model for CFS based on a treatment for hepatitis C called interferon-alpha. 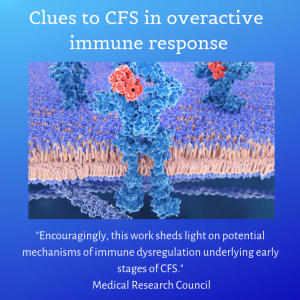 Interferon-alpha activates the immune system in the same way as a powerful infection. A lot of patients develop acute fatigue during treatment with interferon-alpha and a minority go on to have a CFS-like illness, where fatigue lasts for more than six months after the treatment ends.

The researchers measured fatigue and immune system markers in 55 patients before, during and after treatment with interferon-alpha, tracking which people developed the persistent CFS-like illness.

The team found differences in the immune systems of 18 patients who developed lasting fatigue compared to those who recovered as normal.

During treatment with interferon-alpha there was a much bigger immune response among those who developed the CFS-like illness, with a doubling in the levels of immune system ‘messenger’ molecules interleukin-10 and interleukin-6.

Importantly, even before treatment started, levels of interleukin-10 were higher among those who went on to have lasting fatigue, suggesting the immune system may have been ‘primed’ to over-respond.

Lead researcher Dr Alice Russell from the IoPPN says: ‘For the first time, we have shown that people who are prone to develop a CFS-like illness have an overactive immune system, both before and during a challenge to the immune system. Our findings suggest that people who have an exaggerated immune response to a trigger may be more at risk of developing CFS.’

“Piecing together the scientific jigsaw, it now seems increasingly likely that we are dealing with a sequence of events in ME/CFS that involve both infection and the immune system response.”

“A straightforward viral infection is leading to a immune system reaction that then fails to settle down.”

“And the on-going production of inflammation then causes immune system chemicals that affect various parts of the body – muscle and brain function in particular.”

“These findings also reinforce the need to investigate treatments – as are being used very successfully in inflammatory conditions like rheumatoid arthritis – which can dampen down low-level immune system activation.”

By the time the CFS-like illness developed, however, there was no longer any detectable difference in the immune system of patients compared to those who recovered as normal. As well as looking at people having interferon-alpha treatment, the researchers also found no difference in immune activation between 54 people with diagnosed CFS and 57 healthy controls.

Alongside the overactive immune response, those people who developed the CFS-like illness had more acute fatigue during treatment with interferon-alpha than people who recovered as normal. Yet before treatment there was no difference between the groups in their levels of fatigue or in any psychiatric symptoms like depression or recent stressful life-events.

Provides evidence that an overly-strong initial immune response can set up a long-term illness – may be relevant to #mecfs (echoes of Dubbo studies). Plus evidence that psychosocial factors have no role in chronic fatigue after immune activation. https://t.co/bnjqoBA4wY

Senior researcher Professor Carmine Pariante from the IoPPN says: ‘A better understanding of the biology underlying the development of CFS is needed to help patients suffering with this debilitating condition.’

‘Although screening tests are a long way off, our results are the first step in identifying those at risk and catching the illness in its crucial early stages. Confirmation is needed that the findings from people treated with interferon-alpha apply to people with CFS, and future work to better understand the factors that may be driving an exaggerated immune response is required.’

Dr Neha Issar-Brown, Head of Population and Systems Medicine at the Medical Research Council, which funded the research, said: ‘CFS/ME is a serious condition and its underpinning biology is poorly understood. Encouragingly, this work sheds light on potential mechanisms of immune dysregulation underlying early stages of chronic fatigue syndrome. The MRC strongly encourages more research to better understand this condition in order to address an area of unmet clinical need.’