(See also the updates at the bottom of this blog from the BBC re: sentencing.)

We have covered the use of this unlicensed product in relation to ME/CFS before.

This was back in 2015 when the Medicine and Healthcare products Regulatory Agency shut down production at Immuno Biotech in Cambridge and urged patients who had taken the product to see their GPs.

A further disturbing news report appeared last week on the BBC that relates to proceedings at Southwark crown court and the prosecution of Immuno Biotech founder, David Noakes.

“Noakes, 65, of Waldershare, Dover, pleaded guilty to charges of manufacturing, supplying and selling the unlicensed medicine and money laundering. He is expected to be sentenced next week.” 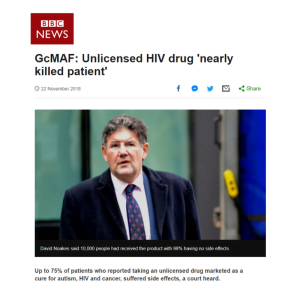 “Only four of the 17 patients did not complain of side effects after taking the human blood-based product – said to be derived from GcMAF, a cancer therapy treatment, the judge was told.”

“Sixty-five per cent of people taking GcMAF improved, he added, rising to 85% if they took 10 or more vials of the product.”

“On Wednesday, the court heard from a member of a self-help group for people with chronic fatigue syndrome based in Chester.”

“Joan Crawford, a chartered chemical engineer, told the court about half of the 16 members who took GcMAF in 2012 experienced positive changes, while a quarter experienced no change, and just “a couple” felt worse in the short-term.”

“During the hearing Noakes defended GcMAF as a treatment for a number of conditions, but on Tuesday said he no longer claims it cures cancer.”

In 2015 I stated that the ME Association was aware that people with ME/CFS were taking this product, but that no research evidence existed for its safety or efficacy in the treatment of this disease. This remains the position today.

This product is very speculative and comes with serious concerns about its safety. It is not something we can recommend. If you are considering this product – or others like it – then please speak to your GP in the first instance.

BBC The One Show Feature on David Noakes

28.11.18 BBC The One Show carried a feature on the outcome of the prosecution of David Noakes and GcMAF. It is shown at the very start of the show and is now on BBC iPlayer for the next 29 days. 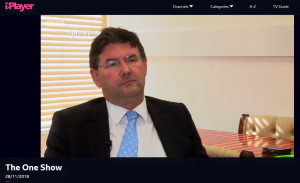 “The supply was discovered when the Medicines and Healthcare Products Regulatory Agency (MHRA) raided a Cambridge laboratory in January 2015, and warned the public GcMAF may pose a significant risk to people’s health.

“Between 2011 and the MHRA raid, Immuno Biotech made £7.9m from the sale of products with Noakes spending nearly £1m of it on planes, Southwark Crown Court heard.

“It was marketed as a cure for autism, HIV and cancer, although Noakes admitted he was constantly “toning down” the claims and no-longer said GcMAF was a cancer cure.

“Cancer Research UK and the National Autistic Society were among those who have raised concerns about the product and Guernsey’s government banned its importation in February 2015.

“Noakes was sentenced to 12-month terms for each of four offences relating to the unlicensed medicine to run concurrently, and to a further three months for money laundering.

“He was also disqualified as a company director for eight years.

“Immuno Biotech scientist Dr Rodney Smith, 55, of Huntingdon, Cambridgeshire was jailed for eight months after admitting five charges relating to the manufacture, possession and sale and supply of unlicensed medicine.

“Another scientist, Emma Ward, 44, also of Huntingdon, was sentenced to eight months in prison, suspended for two years and also ordered to complete 150 hours of unpaid work after pleading guilty to five charges relating to unlicensed medicine.

“Lorraine Noakes, 58 of Ringwood, Hampshire, was given a six-month sentence suspended for two years on both counts and ordered to complete 150 hours of unpaid work after admitting two counts of selling and supplying the unlicensed substance at an earlier hearing.

“Noakes’ estranged wife distributed the GcMAF by packing it in vials in flasks bought from household retailer Wilko.

“A statement from Guernsey’s health committee said due to “the decision to ban the importation of this unlicensed and untested product, both staff and politicians were subjected to abuse and accusations the likes of which we have never seen before and sincerely hope to never see again.”

“It said politicians and officers were “publicly accused of being corrupt and killing people”, but carried out their “overarching aim to protect the community”.