You can now watch the documentary via BBC iPlayer or YouTube (below).

The ME Association has been heavily involved in the making of this documentary feature. Dr Charles Shepherd has been interviewed for the film, and interviews also took place with members of the UK M.E. Biobank team – a project supported by the ME Association.

Dr Shepherd, Dr Nacul and Dr Lacerda have also been interviewed about the documentary and M.E. issues in general for BBC Breakfast, BBC Radio 1 and BBC Radio 5 Live. All interviews appeared during the day (and night) of Tuesday 8th May, 2018. 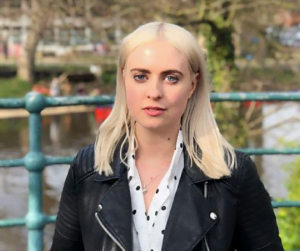 Presenter Emma Donohoe (pictured) was diagnosed with M.E. when she was 19, an illness which many doctors don’t understand and people still talk about as “yuppy flu” – thinking sufferers are being lazy or too depressed to get out of bed.

Now at 24, Emma has been able to reduce some of her symptoms and wants to find out in a new BBC Newsbeat documentary if anything has improved since she first got sick and what life is like now for other young sufferers who are living with severe M.E.

An estimated 250,000 people in the UK are living with the illness, many bed bound and completely dependent on care. But change is coming as the way the illness is treated is being reviewed by NICE – the organisation which sets best medical practice. This follows consistent fears that the standard NHS treatments may be making people worse.

During the film, Emma meets sufferers and family members of those living with the debilitating condition such as young mum, Sophie, whose severe M.E. means her body is so sensitive she can only tolerate to be around her toddler for five minutes a day.

She also meets Hannah whose condition means that when all of her symptoms flare, she can’t even drink water without vomiting. And finally, Emma is left in tears after meeting the family of Merryn Crofts who lived with severe M.E. for six years and passed away in May 2017 just 10 days after her 21st birthday.

Emma hears about the excruciating pain Merryn’s condition caused her, the struggle to find doctors who believed that her condition was physical and the shame she felt having an illness that is often doubted and widely misinterpreted.

In the film, Emma visits the latest research efforts to find new treatments and a better understanding of M.E.

Will she end with hope or despair?