Emma Jenkins has had M.E. for around 20 years. She tells us that her journey of recovery is far from over, but she’s much better than she was. Hers is another inspiring tale of patience, courage, and a determination not to be beaten.

When her M.E. was at its worst, Emma was trapped in bed, in pain and lonely.

She says that she felt imprisoned, unable to sleep for weeks and too weak even to feed herself. She struggled to find foods that she didn’t react to.

These were dark years of mental and physical agony, made worse by the judgement from others who could not understand the illness.

Recovery began slowly, seven years ago. She became well enough to sit up in a wheelchair and was able at long last to appreciate seeing the outside world again.

Life continued to improve after months in hospital that helped her to walk once again. She was able to venture outside with her dog Meme. Gradually fitness and confidence returned and the pain in her limbs and spine lessened.

The next step was to re-join the wider world…

She started gradually, with some voluntary work caring for the physically disabled just one evening a week.

But it was a huge challenge – she found concentration hard and initially struggled to communicate. And yet, after two long years, she found the courage (and necessary focus) to start driving again.

The light at the end of the tunnel was growing stronger but it still took another three to five years to be able to face setting goals – like moving out of the family home into one of her own.

She made the move and it helped her self-esteem to such an extent that she plucked up courage to take a part-time job locally in marketing. She promoted a professional cycle team, which she really enjoyed, and it was there that she met her husband-to-be. 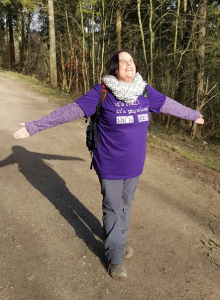 Emma says, “I hoped that I would be fully recovered by now, but I appreciate my life how it is because it had been so much worse.

“I am now happily married; however, I still must pace my energy levels and my immune system is not as good as it could be.

“I still need to work part-time and have to remain in bed until 12pm most days just to manage the time I am awake.

“I want to say to others, ‘Please hold on to hope’.

“I am not saying you can recover completely from M.E but with patience and determination you might eventually have a better quality of life.”

For Emma, it took many years but, eventually, fitness returned and she was able to start hiking with her husband – something that they both love doing together.

They started with small outings at weekends, but gradually they built up the distances, until finally deciding an attempt on Snowdon was in order.

Emma says, “It was awesome, but also very emotional, because I could see how far I had come: from being spoon-fed to climbing a mountain!”

This was just the start of their exciting new journey together. Since then Scafell Pike and Skiddaw have been successfully conquered.

They now feel that the Third British Peak needs to be attempted. Later this year, Emma and Pete will be tackling Ben Nevis!

Emma stresses that M.E. remains a part of her life, but she understands her body well enough to know how far she can push it.

Every stage of the journey – both to Scotland and up Ben Nevis – will be carefully planned and scheduled to minimise the impact on her health.

She is also aware that she would not now be as well as she is, that none of this would have been possible, without the support of a loving, supportive, family.

She says, “Thanks for all the support from my loving mum, her partner, my nan and my loving husband. Rest in peace, nan and my dog Meme xx”

“I want to desperately raise money, awareness and hopefully inspire others to try something new.

“This year I will be attempting to climb Ben Nevis with my lovely supportive husband, Pete. Thanks for taking the time to read my story. Wish me luck!!”

Emma is helping to raise vital funds for the ME Association and if you would like to support her Ben Nevis challenge, then please donate via her JustGiving page.