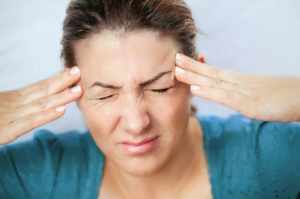 Headaches are quite commonly reported by people with ME/CFS and form part of the diagnostic criteria.

We have an ME Association information leaflet that covers all aspects of headaches in relation to ME/CFS, and their management.

There is also quite a lot of patient evidence, and some research evidence, to indicate that migraine type headaches are more common in people with ME/CFS.

And with the news last week that there appears to have been a significant breakthrough in the treatment of migraine, with new drugs that can reduce the number and severity of attacks (see below), we have decided to use this month’s website survey to look at migraine type headaches.

The survey can be found on the ME Association homepage – it’s towards the bottom of the page.

Migraine type headaches tend to be recurrent, disabling and often prevent a person carrying on with their normal daily life.

The pain is often described as pounding or throbbing on one or both sides of the head. Accompanying symptoms frequently include nausea and visual disturbances, and sometimes include speech disturbances.

There are a number of over-the-counter (OTC) and prescription-only drugs for treating and preventing migraine attacks.

For acute attacks, simple OTC painkilling drugs such as aspirin, paracetamol or ibuprofen/Brufen may be sufficient. Dispersible or effervescent preparations are preferable because migraine slows down gut peristalsis (= gut movements) and decreases drug absorption during an attack.

If simple painkillers don’t help, there are more powerful prescription-only drugs, especially a group known as the triptans (e.g almo/ele/frova/nara/riza/suma/zolmi – triptan) which act on a chemical transmitter system in the brain that seems to be involved in triggering migraine attacks.

There are also drugs available that will reduce sickness/nausea during an attack and compound preparations that contain both a painkiller and an anti-sickness drug.

During an acute attack people often find that lying in a quiet dark room is one of the most helpful things you can do. Some people also find cooling, using a cold flannel or gel ice pack, helpful.

If you are having two or more migraine attacks per month, or have attacks that are becoming increasingly severe or prolonged, there are prescription-only drugs that can help to reduce the frequency of attacks.

Preventative prescription-only drugs include low dose tricyclic antidepressants, gabapentin, pizotifen (of limited value and can cause weight gain), sodium valproate, and beta-blockers such as propranolol (which are often poorly tolerated by people with ME/CFS).

Botulinum toxin is a further option for more severe migraine where these drugs have not been helpful. Clonidine is no longer recommended for migraine prevention because it can aggravate depression and insomnia.

Feverfew
There is also some limited evidence to show that a popular herbal remedy called feverfew, a plant that comes from the daisy family, can be helpful in preventing attacks. But do talk to your doctor or pharmacist before taking feverfew because it can have side-effects (abdominal pain and diarrhoea; allergic reactions; nervousness; sore mouth and mouth ulcers); shouldn’t be taken during pregnancy; can interact with other drugs (e.g blood thinning tablets such as warfarin) and shouldn’t be taken with aspirin or ibuprofen (because it acts in similar way).  Feverfew should be discontinued gradually because abrupt cessation can cause an unpleasant feverfew withdrawal syndrome.

If you have migraine-type headaches you need to look at possible trigger factors as well. These can include drugs (especially the contraceptive pill), foods such as citrus fruits and chocolate; caffeine intake; chemicals; stress; poor sleep and bright lights. An exclusion diet can help to identify ‘culprit foods’ – an approach that is best carried out with the help of a dietician.

If migraine-type headaches aren’t being well controlled, you could ask your GP to refer you to a hospital based migraine clinic.

Ravindran et al (2011) have reviewed the role of migraine headaches in ME/CFS and concluded that mechanisms of migraine pathogenesis, such as central sensitisation, may contribute to ME/CFS pathophysiology. PubMed Reference.

A new approach to preventing migraines can cut the number and severity of attacks, two clinical trials show.

About 50% of people on one study halved the number of migraines they had each month, which researchers at King’s College Hospital called a “huge deal”.

The treatment is the first specifically designed for preventing migraine and uses antibodies to alter the activity of chemicals in the brain.

Further trials will need to assess the long-term effects.

Research has shown a chemical in the brain – calcitonin gene-related peptide or CGRP – is involved in both pain and sensitivity to sound and light in migraine.

Four drug companies are racing to develop antibodies that neutralise CGRP. Some work by sticking to CGRP, while others block the part of a brain cell with which it interacts.

Clinical trials on two of the antibodies have now been published in the New England Journal of Medicine.

One antibody, erenumab made by Novartis, was trialled on 955 patients with episodic migraine. At the start of the trial the patients had migraines on an average of eight days a month.

The study found 50% of those given the antibody injections halved their number of migraine days per month. About 27% did have a similar effect without treatment, which reflects the natural ebb and flow of the disease.

Another antibody, fremanezumab made by Teva pharmaceuticals, was trialled on 1,130 patients with chronic migraine. About 41% of patients halved their number of migraine days compared with 18% without treatment.

Prof Peter Goadsby, who led the erenumab trials at the NIHR research centre at King’s College London, told the BBC: “It’s a huge deal because it offers an advance in understanding the disorder and a designer migraine treatment.

“It reduces the frequency and severity of headaches.

“These patients will have parts of their life back and society will have these people back functioning.”

He said other data, not published in the latest studies, suggested a fifth of patients had no migraines at all after treatment.

The antibodies are not the only preventative drugs for migraine. Others include former epilepsy and heart disease pills as well as botox.

But Simon Evans, the chief executive of Migraine Action, said those drugs came with a lot of side-effects and did not work for everyone.

“Some doctors give patients a choice of being angry or fat-and-dosey and the drug they give them depends on their answer,” he said.

The hope is discovering CGRP and precisely targeting it with antibodies should lead to fewer side-effects. Both studies say long-term safety data still needs to be studied.

The problem with antibodies is they tend to be more expensive to make than other therapies.

Prof Goadsby thinks patients who get no benefit from existing treatments or cannot cope with the side-effects are those most likely to benefit.

Dr Andy Dowson, who runs headache services in Kent and London, said: “I am really enthusiastic we have something new that’s coming, but we need to know cost, who will respond and a lot more detail as we go down the line.

“Chronic migraine is in the top seven conditions for lifetime disability and yet nothing much is done about it, maybe this is going to help us to make some progress.”

You can read the full story on the BBC News website