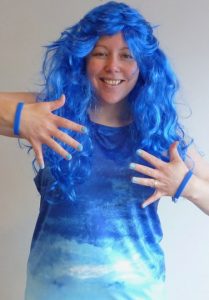 It is such a joy working with our fundraisers over the years. The people who keep coming back for more, and more. With ever more whacky ideas, but with the same steely determination to do their best to make a difference for M.E.  People like Jo Hardstaff.

Jo has had M.E. since she was 16 but considers herself ‘lucky’ as she spent most of her 20’s in good health.  I first came across Jo in 2014 when she donated some of her beautiful and original button jewellery for the ME Association Christmas Auction of Promises.Then she reappeared as a Princess in M.E. Awareness Week in 2015.

Then things got rather more serious. Jo says that her M.E. makes her incredibly sensitive to things – like light, sound, clothing and even her hair. So she decided to have her head shaved, just for M.E.

She liked the style so much that she kept it shaved for some time afterwards too. Not content with that, she nobly posed with crazy blue wig as poster girl for our 2016 ME Awareness Week appeal.

Then all went quiet. It can happen when people have ME, especially when they have young families too. They fundraise, do their bit, and then real life intervenes. 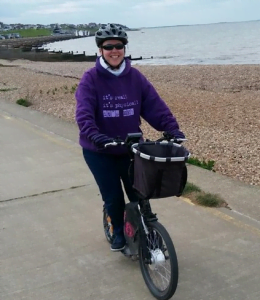 But not so with Jo. In April she announced that she was planning to kick scoot her way around the south coast of England – hopefully all the way from Kent to Cornwall. Sensibly taking her time and breaking it into ‘do-able segments’ of around 25 miles.

Even though her scooter is electric, these distances can still take quite a toll on her body. Each time, she’s dropped off where she finished last and then picked up when she feels she can do no more.

Jo has now completed five such expeditions which have taken her from Whitstable, through Broadstairs, Sandwich, Deal, Walmer, Dover, Capel-le-ferne, Folkestone, Littlestone, Dungeness, and Rye.

Jo passionately believes that the most important thing to people with M.E. is hope. She says: “I am a great believer that when there is hope, there is a way and that it is so important for those suffering with M.E. and their carers to always have hope and never to give up.”

Her next scoot will start at Winchelsea and then she’ll have to start thinking about logistics as she gets further away from home down the coast. Any ideas or suggestions would be most welcome.

You can read more about her adventures – and see some photographs of stunning south coast seascapes in her blog, Wonky M.E.

If you haven’t already supported this latest crazy adventure, please do so and give what you can spare in support of this superwoman.