Jasmine Farrow, 37, was diagnosed with chronic fatigue syndrome, also known as myalgic encephalomyelitis (ME), in 2012 and found herself bed-bound for almost a year. She said: “I was unable to have my curtains open most of the time as the light hurt my eyes.” 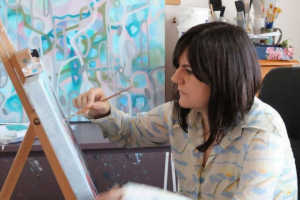 The disease has a number of symptoms including extreme tiredness. It tends to develop between the ages of mid 20s and mid 40s, according to the NHS Choices website.

When describing how it affected her, Ms Farrow said:

Ms Farrow, who grew up in North Walsham and now lives near Acle, Norfolk, said her slow recovery has been greatly helped by her painting. “Finding words is still often a problem and I do find talking tiring still. So I use my art as a way of expressing myself without the need for words,” she said.

She said: “I am sure art has helped my recovery because it is congruent with the core of who I am. I feel such a relief to be making art again. I now have a better understanding of how much I needed it. I really don’t feel myself without it.”

She has a major collection of paintings on her website. She said: “I can express my experiences and the abstract hallucinations I experienced and the emotions I feel and those memories that kept me going when I was laying in darkness for days.” She said she is now well enough to get out and about on her electric scooter.

The disease affects 250,000 people in the UK, according to the ME Association. The charity said of Ms Farrow’s experience:

“It’s great to hear that Jasmine has found a way of expressing herself through art. Those with severe ME often find themselves becoming isolated and almost invisible from society, especially those who are bedbound or housebound. Art can’t take away the symptoms, but anything that helps sufferers find a voice can only be a good thing.”