Prompted by advances in the understanding of defects in lymphocyte cytotoxicity, the discovery of adaptive natural killer (NK) cell subsets associated with certain viral infections, and compelling links between stress, adrenaline, and cytotoxic lymphocyte function, we reassessed the role of cytotoxic lymphocytes in ME/CFS.

Forty-eight patients from two independent cohorts fulfilling the Canada 2003 criteria for ME/CFS were evaluated with respect to cytotoxic lymphocyte phenotype and function. Results were compared to values from matched healthy controls.

One patient expressed low levels of perforin, explained by homozygosity for the PRF1 p.A91V variant. However, overall, this variant was present in a heterozygous state at the expected population frequency among ME/CFS patients.

No single patient displayed any pathological patterns of cellular responses. Increased expansions of adaptive NK cells or deviant cytotoxic lymphocyte adrenaline-mediated inhibition were not observed. In addition, supervised dimensionality reduction analyses of the full, multidimensional datasets did not reveal any reproducible patient/control discriminators.

This is my report on this new immune system research based on a presentation at the 2017 Invest in ME Research conference. The full version of my report will appear in the August issue of ME Essential magazine: 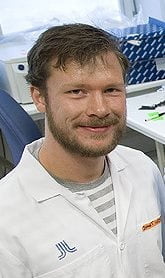 Dr Theorell’s research is focussed on people who have what are called immunodeficiency syndromes (i.e. their immune systems are not functioning effectively). In relation to ME/CFS, he has been looking at a specific part of the immune system orchestra called cytotoxic lymphocytes.

These are cells that combat intracellular infections with dysfunctional abnormalities being reported in previous research studies.

He started off by describing the way in which NK (natural killer) cells act by recognising infected target cells, locking onto these target cells, and then releasing what are called pro-inflammatory cytokines.

Several research studies have looked at the function and phenotype of cytotoxic lymphocytes in ME/CFS, but their role remains uncertain.

This study involved 48 people with ME/CFS (meeting Fukuda and Canadian criteria) in two independent cohorts from Oslo and Stockholm plus matched controls. The phenotype and function of lymphocytes in frozen and thawed PBMCs (peripheral blood mononuclear cells) was evaluated using flow cytometry and compared to cells from age and sex matched controls.

There were no consistent differences found between people with ME/CFS and healthy controls in the wide range of functional tests involving cytotoxic lymphocytes – e.g. cell numbers, activation status, target cell killing capacity and cytokine release. In addition, no clear subgroups were identified.

These results do not therefore point to a role for defects in lymphocyte cytotoxicity in ME/CFS. Neither do they support the use of NK cell function as a biomarker for ME/CFS.