Disabled writer and actor Thom Jackson-Wood, who has ME, talks to Disability Horizons about his films, Awaken and The Black Box, both of which are about disability. Written after frustrations at disabled people being misrepresented on TV, he hopes the films will raise awareness of different disabilities, and ME in particular.

Note: Click the link above to read the full article. We’ve reproduced some highlights from the 25th May interview, below.

What is ME and what are some of the issues that you deal with on a daily basis? 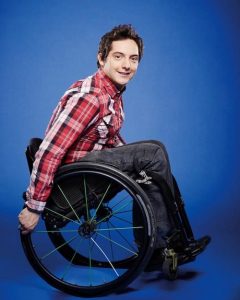 Myalgic Encephalomyelitis (sometimes called Chronic Fatigue Syndrome and known for short as ME), is somewhat difficult to explain. Action for ME defines it is a long-term (or chronic), fluctuating neurological condition that causes chronic fatigue and pain.

Imagine being tired all the time, unable to shake it off with a long sleep, and being in pain, even when you don’t do any physical activity.

Additional symptoms can include lapses in mental processing (commonly known as ‘brain fog’), extreme sensitivity to light and sound, gastrointestinal issues (with your stomach and intestines), incontinence, partial paralysis and social anxiety.

However, this is not a complete list. Generally, the more severely you are affected, the more likely it is that you will have to deal with additional symptoms. Everyone with ME has different levels of severity, and it can often target certain areas of the body.

In my own case, I would say I am moderately affected. I am able to lead a relatively active life – I can work part-time as an actor and writer. Being able to work from home where I can rest when necessary makes a big difference.

However, as I have serious chronic pain in both legs, I find walking very difficult and therefore use a manual wheelchair, a mobility scooter or crutches to get around. ME has also messed up my bladder control, so I wear incontinence pads all the time. As such, while my ME has only moderately affected my fatigue, I am more severely affected by additional symptoms.

What are your thoughts on how people perceive ME?

ME is also often referred to as Chronic Fatigue Syndrome (CFS). While I understand why people may want to call it that, CFS is only part of the puzzle that is ME. While the two conditions are related, they are not the same. Think of ME as the bigger, nastier brother of CFS and you’re getting there. As I’ve found from my own experiences, chronic fatigue is not the only issue I deal with, and many of my other ME symptoms affect me worse.

What made you decide to make films about your condition or disabilities in general?

I began writing screenplays when I got sick with ME, mainly as a creative outlet. It was also a coping mechanism and a way to try and make something positive out what was a mostly negative situation.

I then began writing about disability in general because there was so little material out there that I could relate to. In addition, what did exist wasn’t very original and it relied too much on non-disabled people’s perceptions, or misperceptions, of disability. So, rather than moan about the lack of representation of disabled people, I thought I would do something about it myself and write it.

I feel that I have only just begun to scratch the surface of stories about disability, and how to bring them to life on screen. I want to create something fresh and exciting that does not hinge on clichéd stereotypes of disabled people. I feel I am well-placed to do so from my own experiences.

You’ve said that both Awaken and The Black Box aren’t necessarily documentaries, they’re stories. Without giving too much away, what kind of stories are you trying to tell? 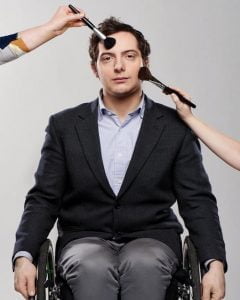 The best way to describe Awaken and The Black Box is to say that they’re fictional films that are inspired by true events, so a docufiction style. I could have told the stories of Awaken and The Black Box in a documentary style, but they would have looked a lot like telethon appeals, which I was keen to avoid. Rather than present my condition as a series of facts, I wanted to use it to tell a story. So they essentially use fiction to tell the truth.

In addition, both of the films are about elements of my life that have been reworked into an abstract setting in order to make ME better understood by people. In Awaken, you see a man trying to achieve his dreams, but he is held back by a number of issues, including ME, an autistic spectrum disorder and benefit cuts. In The Black

In The Black Box the main character is a writer who has been unable to finish a story because of his ME. This creates tension between the man’s muse, who wants him to finish a project, and his ME, which continues to slow him down.

The films are both set within an actual black box. What was the reasoning behind this?

I felt that keeping everything contained in a single space would visually represent the extreme isolation you can feel when you have ME. It’s also because of the black box theory of computing, science and technology – where you see what goes in and what comes out, but you have no knowledge of its internal workings. This highlights how much we still don’t know about ME.

A final, personal reason was inspired by flight data recorders on aeroplanes and trains, which are commonly known as black boxes. In ME and chronic illness circles, if your symptoms worsen suddenly, this is commonly known as a ‘crash.’ The theory behind this was that if my energy levels ‘crashed’ these films would serve as data recorders of my life – in other words, Awaken and The Black Box would become my own black box recorder.