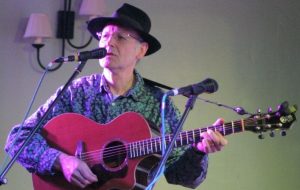 The ME Association has thanked an Anglesey musician for his dedicated fundraising efforts which have raised hundreds to support sufferers of an illness which causes an extreme tiredness that does not go away with rest or sleep.

Singer and guitarist Andy Beaumont, whose wife Kate has ME, gives up his spare time to play at pubs and clubs around north Wales, donating all the profits to the charity.

Performing solo as “Andy Bob Beaumont”, with his band The Scapegoats or with his brother Geoff and nephew Bob (“The Beaumont Brothers”), the 71-year-old has also released an album and written a song, Ball with no Bounce, about the illness.

The charity’s fundraising manager, Helen Hyland, said: “Without people like Andy, giving up their time, we wouldn’t be able to fund research into this horrible illness which steals too many lives – or to run our support line.

“We can’t thank him enough. Not only is he a dedicated carer for Kate, but he still finds time to help other people with the illness through our charity.”

THIS 71-YEAR-OLD WANT TO CLIMB EVERY MOUNTAIN IN WALES…

Andy has also set himself the challenge of climbing every mountain in Wales over 2000ft in height for the charity – and has reached 150 with another 40 to go. With donations to this challenge and to his music, he has raised a total of nearly £2,500.

He retired as acting head of the School of Ocean Sciences at Bangor University in 2010, and has been his wife’s main carer for nearly 20 years. The couple celebrated their silver wedding anniversary in June.

He said: “Music has always been important to me, and has been a lifeline during Kate’s illness.

“It’s a way of combining something I love doing with raising money for a good cause. When she was well, Kate used to come to hear me play. But now, she often struggles to tolerate any noise. But she’s really supportive and knows what it means to me.”

Andy and Kate, both biological scientists, met in 1988 at a Marine Science Conference in Swansea.

Kate, whose main hobby had been scuba diving, became ill in 1995, and was diagnosed with ME which slowly got worse until she had to retire from her post-doctoral research position.

In July 2013 she suffered a relapse which confined her to bed. Her symptoms included intolerance of light, noise or touch and some pain. She was unable to read, watch TV, listen to the radio or talk for more than a few minutes.

“A FRIGHTENING AND DESPAIRING TIME FOR US BOTH”

“It was a frightening and despairing time for us both. She very gradually began to emerge from the nightmare during 2015 and is now able to listen to a little radio, watch TV for a short time, read a little, whisper a few words and engage more with me and the life around us.”

But Andy is determined not to let the condition beat them.

He added: “Using my musical activities to raise funds for ME research is very satisfying.

“I’m happy to feel that the good luck I’ve had in my life – my health, rewarding career, living in beautiful countryside, loving relationships, fun with music – can now be used to help those whose lives have been struck down and strangled by the dreadful bad luck of living with ME.

To find out more or to donate, visit Andy’s JustGiving page https://wwww.justgiving.com/fundraising/ball-with-no-bounce