Our Christmas appeal, Make ME Better, has reached its target of raising £50,000 to fund pioneering biomedical research into the illness. The ME Association’s medical adviser, Dr Charles Shepherd, explains what it means to him. 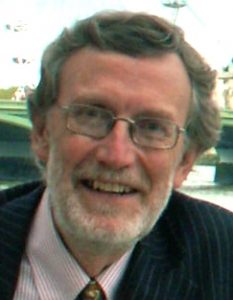 In the mid-70s a young student left medical school to walk a well-worn career path; a few years in hospital building up experience would, he expected, lead to a place in general practice as a family doctor.

And it was all going to plan, remembers Charles Shepherd. He graduated, worked his way through stints on the frontline of A&E, paediatrics, respiratory departments; settled down and married his girlfriend, Pam, a nurse.

The stage was set for a very normal life where, if there weren’t roses over the front door, there were patients in his waiting room and when he got home, a kick around in the garden with his children.

And then in his final placement before leaving for general practice, those well laid plans unravelled like a ball of wool.

“I was Resident Medical Officer at Cirencester Memorial Hospital,” explains Dr Shepherd. “In those days, it was a proper cottage hospital that did everything under the sun; general medicine, broken bones, obs and gynae – the lot.

‘I WENT BACK TO WORK STILL NOT FEELING GREAT…”

“I caught chickenpox from one of my patients who had shingles – I’d never had chickenpox as a child. I was really, really unwell. I went back to work still not feeling great.

“That’s where it started, a cycle of going back to work, going off sick again and seeing consultants who all said there was something wrong with me, but they didn’t know what.”

For two years, he struggled on, frustrated and knocked down by each dead-end diagnosis. “In the end, I started my own investigations.

“When I read about the symptoms of ME – brain fog, balance difficulties, exercise-induced muscle weakness, and problems with temperature control – that was it, I knew. They were my symptoms.”

He got an appointment with Dr Melvin Ramsay, the consultant in infectious diseases who first wrote about the newly named Myalgic Encephalomyelitis for the medical journal, The Lancet, after dealing with the outbreak at the Royal Free Hospital in London in 1955.

“Dr Ramsay said: ‘yes, in my opinion you’ve got classic ME’.

That diagnosis turned all those well-laid plans upside down. Instead of earning a comfortable living as a GP, he found himself applying – and being turned down for – incapacity benefit, the equivalent of ESA at the time.

“I went back to work, and I knew I shouldn’t because I was in danger of making wrong decisions because I felt so unwell. But when I was told I couldn’t have sickness benefit I didn’t have any other option.

‘MY DIAGNOSIS CHANGED EVERYTHING; MY CAREER, OUR FINANCES. WE EVEN TALKED ABOUT WHETHER WE SHOULD HAVE CHILDREN”

“My diagnosis with ME changed everything; my career, our finances. My wife and I even talked about whether we should have children.

“When we did start a family, there were a lot of things that I wasn’t able to do with them, things that I have common with everyone in this situation.

“It’s why I identify with all the problems patients with ME have to face. I was lucky, I had sympathetic medical colleagues. But they couldn’t make a diagnosis, couldn’t tell me what was wrong with me and couldn’t give me proper advice on how to manage it.”

He became involved with the ME Association in the mid-1980s and has played an active role in everything the charity does – information, support, campaigning, media and research – ever since.

And so to today and the success of the charity’s Christmas appeal, which has reached its target of £50,000 in a breathtakingly short space of time – a success which he admits has taken him by surprise.

The money will fund research by Dr Karl Morten and his team into metabolomics, chemical clues that are left behind after all kinds of cellular activities have taken place in various body tissues and organs.

STILL TOO EARLY TO TALK ABOUT A CURE, BUT THIS WILL HELP PUT SOME CRUCIAL PIECES IN PLACE

It is too early to talk of finding a cure, says Dr Shepherd. But with ME being a complex medical jigsaw, he believes Dr Morten’s research will help to put some crucial pieces into place.

“It opens up not one door, but three; diagnostic, clues as to the cause of ME and, if there are robust and consistent biochemical abnormalities found in this study, then the possibility of new approaches to drug treatment.

“That’s three exciting possibilities. It would be almost criminal not to be making use of these new technologies to do this.

“We’ve got these new technologies that can look at things we’ve never looked at before. So we can now start to look at what’s going wrong at a cellular level in diseases like this.

“And because we have already got clues in the same direction from the Naviaux study that came out from America earlier this year, it really does look as if metabolomics could produce a significant advance in understanding.”

As a doctor – and as a patient – Dr Shepherd believes this could be a fresh start for research into the illness.

“There’s been a fantastic response to the appeal. The generosity of people, particularly at this time of year and when we know times are tough, has been incredible.”

‘WE ARE LUCKY TO HAVE SOMEONE LIKE KARL, WHO HAS NOW COMMITTED TO GIVING SEVERAL YEARS OF HIS WORKING LIFE TO M.E. RESEARCH’

“We are lucky to have someone like Karl who is now committed to giving several years of his working life to ME research.

With your help, we’ve hit the £50,000 target of our Make ME Better appeal. But we’re keeping the campaign going, in the hope that we can fund even more research – and we’ll reveal more about that shortly.

To donate visit our JustGiving page, please use the following link: