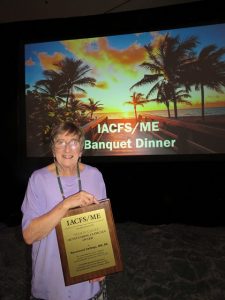 A local doctor has been recognised with an international award for work relating to Chronic Fatigue Syndrome.

Dr Ros Vallings, who lives in Clevedon and has a practice in Howick, has received the prestigious international Nelson Gantz Clinicians Award.

Dr Vallings received the award at the IACFS Conference held in Florida, USA on October 30. The award is given in recognition to a physician who emulates Gantz’s clinical acumen, his passion for medicine, and his empathy for persons with ME (Myalgic Encephalopathy)/CFS (Chronic Fatigue Syndrome/FMD Fibromyalgia Disease).

Dr Vallings has been a general practitioner in Auckland since 1967 and specialises in ME/CFS and related disorders and is recognised as New Zealand’s leading authority in ME/CFS. She has been seeing patients with ME/CFS in New Zealand for more than 36 years and has a patient base of more than 6000 individuals.

She attends two international conferences annually where she writes up reports which are disseminated worldwide to interested groups said Heather Wilson, the president of the Associated New Zealand Myalgic Encephalopathy Society (ANZMES).

“Articles by Dr Vallings have been published in major medical journals. She is active educating medical specialists, physicians, students, ME/CFS groups and members of the public about the illness throughout NZ,” Ms Wilson said.

“Patients found her on-going compassion and support extremely valuable, especially as the illness tends to create isolation for many of them. General practitioners throughout New Zealand refer patients with ME/CFS to Dr Vallings because of her specialist knowledge in this area.”

Dr Vallings was a founding member and former president of the Associated New Zealand ME/CFS Society. She is now medical adviser to the society.

In 2008, she was awarded membership of the NZ Order of Merit for services to CFS/ME in the Queen’s New Year’s Honours.

Dr Vallings has written two books on ME/CFS. One book is specifically for teenagers while the other concentrates on adults with the condition.

She has sat on various international boards for ME/CFS and has taken part in international groups writing physicians primers and paediatric guidelines on the condition. She has been widely involved with various research groups and served on international committees for ME/CFS.

“Dr Vallings is one of the people who started ANZMES and has stayed on the committee in various roles from president to medical adviser for 36 years to date,” Ms Wilson said.

“I have the utmost respect for Ros for her dedication and support to those who have ME/CFS, her selfless giving and her passion to educate the medical professionals in New Zealand.

“Ros is very deserving of her award and both myself and ANZMES congratulate Ros for this outstanding achievement.”