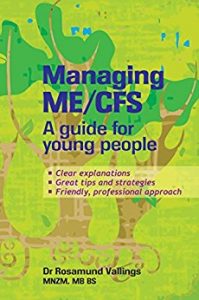 For years, Dr Rosamund Vallings has been the ‘go to’ person for the first written reports from the big ME/CFS research conferences and as a pillar of sound advice, and not only at home in New Zealand.

Now this tiny figure packed with vim and vigour has turned her considerable talents to the education of a whole new generation of children who have gone down with this horrid illness with her new book Managing ME/CFS: A guide for young people.

Forty years of experience and treating and researching ME/CFS have been distilled into a handy 135-page book in large-ish print that kept me riveted from cover to cover.

Written in simple, approachable language, without being the least preachy or patronising, Dr Vallings has pulled off a tour de force which is a distinguished complement to her earlier guide for adults, published just a few years ago.

CLEARLY ONE ‘SWITCHED ON’ WOMAN

This is clearly one ‘switched on’ woman who knows that today’s kids don’t live in age of deference and that they are quite likely – indeed, more likely – to be getting their information about their illness and life in general from their smartphones and devices (without parents looking over their shoulders).

So her book is a guide to living interesting, enjoyable lives, as well as being packed with readable tips about what they can do to help get themselves better.

She’s clearly on their side, but keeps a professional sense of detachment.

The book is split into 15 short chapters which cover all the basics about the illness, the changes that come with puberty, keeping up at school (or not) and how to pack as much fun and variety into life as possible.

SPRINKLE IT ON, IT’S NEEDED IN THE DIET

One thing that did surprise me, as someone who has had to live with restrictions on the stuff that improves the taste of food and Department of Health decrees on the subject, was Rosamund’s robust sprinkling of her text with instructions to her readers to take plenty of salt and salty snacks like crisps. I can see why, of course, and I make no criticism. It was just the surprise of seeing someone still feeling able to write so freely and easily on the subject in the face of a barrage from the food police.

The guide will work as well in the UK as in New Zealand, and there are no glaring language differences. Indeed, I only spotted two – I assume “potato chippies” in New Zealand means Walkers crisps or the like over here. And I’m guessing that the Brit equivalent of Youthline is Esther Rantzen’s Childline 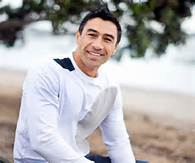 The foreword to Rosamund’s book is provided by Richie Barnett, who captained his country in the rugby league World Cup Final in 2000. He has already signed up as an ANZMES champion.

He suffered many injuries in his playing career with one causing him to need a complete facial reconstruction. Today, he has 10 titanium plates and 20-odd screws holding his face together (perhaps the prodrome to what came later?).

But it was a bad attack of flu in 2012 that brought on the ME with which he lived for the next 14 years. “I felt like someone had put a 50k sandbag on my back and told me to run. I had lost all my energy, and I was in shock trying to deal with it.

“It took six months for a specialist to diagnose me with ME, and the relief at finally being able to put a name to this madness was huge”, he writes.

Barnett said the book was a brilliant must-read for the many young kids who suffer with this illness.

Many adults would also enjoy it.

The book is published by Calico Press calicopublishing.co.nz/book/managing-me-cfs/ and I believe a Kindle version is available on Amazon.