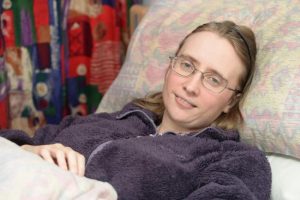 MORE than a hundred pairs of shoes will be lined up outside the Radcliffe Camera in Oxford tomorrow to represent sufferers unable to attend a demonstration to raise awareness for one of the most debilitating and least understood conditions of our time.

The Millions Missing protest at midday on Tuesday will aim to kickstart a national conversation about Chronic Fatigue Syndrome (CFS), a condition which can leave sufferers housebound for decades but is still almost a complete mystery.

More than 100 Oxfordshire sufferers who would love to attend and show their support will not be able to: instead, as with similar events taking place across the world today, they will ask friends or family to take an item of clothing to represent them.

Among those who will be sending a pair of shoes is Zoë Williams from Stanford in the Vale near Wantage.

Ms Williams was diagnosed with ME, a form of Chronic Fatigue Syndrome, when she was just 13.

She was going to King Alfred’s School in Wantage when one day she woke up with flu-like symptoms: aches and pains which made it difficult to walk or move at all and an aversion to bright lights and loud noises.

The disease wiped her out, and she has had to spend most of her life since then in bed. She is now 40.

Ms Williams, the sister of Oxford singer songwriter Trev Williams, said: “It doesn’t feel like being tired, it feels like a poison in your body.

“From day one I wasn’t able to go to school, I needed to spend a lot of time lying down.

“I can do a certain amount without exacerbating the illness but if I do more than that the symptoms increase and it would be complete collapse. I would have to lie down still in a dark room until it goes away.”

The major topic of conversation at today’s demo is likely to be the news that CFS sufferers have finally “debunked” a controversial study into the condition after years of fighting.

A trial by researchers at Queen Mary University of London concluded that sufferers could use behavioural techniques to help themselves.

A group of CFS patients advised by academics have now re-analysed the data and concluded the “recovery” shown by patients on cognitive behaviour therapy in the study was “not statistically significant”.

Nicki Strong, who has organised today’s demo with her daughter Lara – a CFS sufferer for about ten years – said they were “thrilled” with the new conclusion.

Mrs Strong, who lives in Tiddington near Thame, said: “We are finally getting to the truth.

“This event is to raise awareness of the devastation that ME can cause which has been hidden away from a long time, ignored dismissed or psychologised.”

Picture shows Zoe Williams, who lives in Stanford in the Vale near Wantage, who was diagnosed with Chronic Fatigue Syndrome when she was 13, and has spent most of her life in bed. She is now 40.