• For the first time in CFS, we performed MRI regressions with steady state BP and HR.
• Vasomotor centre, midbrain and hypothalamus correlations were abnormal in CFS.
• MRI group comparisons between CFS and controls detected no differences.
• Regulatory nuclei and peripheral effectors/sensors appear to function correctly.
• Signalling between brainstem/midbrain regulatory nuclei appears to be impaired.

Autonomic changes are often associated with the chronic fatigue syndrome (CFS), but their pathogenetic role is unclear and brain imaging investigations are lacking. The vasomotor centre and, through it, nuclei in the midbrain and hypothalamus play a key role in autonomic nervous system regulation of steady state blood pressure (BP) and heart rate (HR).

In this exploratory cross-sectional study, BP and HR, as indicators of autonomic function, were correlated with volumetric and T1- and T2-weighted spin-echo (T1w and T2w) brain MRI in 25 CFS subjects and 25 normal controls (NC).

Steady state BP (systolic, diastolic and pulse pressure) and HR in two postures were extracted from 24 h blood pressure monitoring. We performed (1) MRI versus autonomic score interaction-with-group regressions to detect locations where regression slopes differed in the CFS and NC groups (collectively indicating abnormality in CFS), and (2) MRI regressions in the CFS and NC groups alone to detect additional locations with abnormal correlations in CFS.

Abnormal regressions were detected in nuclei of the brainstem vasomotor centre, midbrain reticular formation and hypothalamus, but also in limbic nuclei involved in stress responses and in prefrontal white matter. Group comparisons of CFS and NC did not find MRI differences in these locations.

We propose therefore that these regulatory nuclei are functioning correctly, but that two-way communication between them is impaired in CFS and this affects signalling to/from peripheral effectors/sensors, culminating in inverted or magnified correlations. This single explanation for the diverse abnormal correlations detected here consolidates the conclusion for a brainstem/midbrain nerve conduction deficit inferred earlier (Barnden et al., 2015). Strong correlations were also detected in isolated NC regressions.

COMMENT BY DR CHARLES SHEPHERD, MEDICAL ADVISER, THE ME ASSOCIATION

The SNS and PNS help to regulate activity in the heart, bowel, bladder, etc. In particular, they can speed up or slow down activity.

So the ANS can speed up the heart/pulse rate, increase blood pressure, and affect blood flow to the brain and muscles.

If there is overactivity in this part of the nervous system, it can also cause irritable bowel type symptoms and bladder frequency.

This plays an important role in symptoms such as orthostatic intolerance/hypotension (where blood pressure falls excessively when moving from lying down to standing), PoTS, cold hands and feet (where the blood vessels over-constrict in cold weather) as well as bowel and bladder symptoms.

And because the ANS affects blood vessel size, and consequently blood flow, it also plays a role in muscle function (muscle has a very rich blood supply) and cognitive function (as blood flow to parts of the brain may be affected).

This important new research has used a special type of brain scanning/neuroimaging (magnetic resonance imaging/MRI) to look at may be happening in the control centres in ME/CFS in relation to changes in pulse and blood pressure. This is research that has not been carried out before.

In what is called an exploratory cross-sectional study, blood pressure and heart rate, as indicators of autonomic function, were correlated with MRI findings in the control centres in the brain in 25 CFS subjects and 25 healthy control.

Abnormal regressions were detected in nuclei of the brainstem vasomotor centre, midbrain reticular formation and hypothalamus, but also in limbic nuclei involved in stress responses and in prefrontal white matter.

We propose that these regulatory nuclei are functioning correctly, but that two-way communication between them is impaired in CFS and that this affects signalling to/from peripheral effectors/sensors, culminating in inverted or magnified correlations.

This is clearly complex research.

In very simple terms, it indicates that while these control centres are functioning correctly, there appears to be a problem involving communication between the various control centres in the brain.

It is interesting to note that the brainstem has been implicated in ME/CFS in other studies using neuroimaging – especially the blood flow study carried out by Durval Costa et al.

So, while this research helps to increase our understanding of ANS abnormalities in ME/CFS and why they may be occurring, it does not offer any new or immediate solutions regarding treatment of ANS dysfunction.

Diagram: Autonomic nervous system – what does it do? 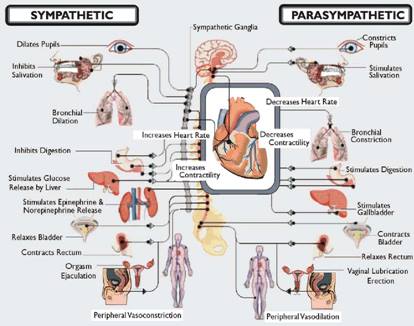 From the Journal of Neurology and Neurobiology, 30 March 2016.

The PACE Trial Invalidates the Use of Cognitive Behavioral and Graded Exercise Therapy in Myalgic Encephalomyelitis/ Chronic Fatigue Syndrome: A Review

The main findings reported in the PACE trial were that cognitive behavioral therapy (CBT) and graded exercise therapy (GET) were moderately effective treatments for Myalgic Encephalomyelitis/Chronic Fatigue Syndrome (ME/CFS), and fear avoidance beliefs constituted the strongest mediator of both therapies.

These findings have been challenged by patients and, more recently, a number of top scientists, after public health expert Tuller, highlighted methodological problems in the trial.

As a doctor who has been bedridden with severe ME for a long period, I analyzed the PACE trial and its follow-up articles from the perspectives of a doctor and a patient.

In addition, 46% of patients reported an increase in ME/CFS symptoms, 31% reported musculoskeletal and 19% reported neurological adverse events. Therefore the proportion negatively affected by CBT and GET would be between 46% and 96%, most likely estimated at 74%, as shown in a large survey recently conducted by the ME Association.

Medication with such high rates of adverse events would be withdrawn with immediate effect. There was no difference in long-term outcomes between adaptive pacing therapy, CBT, GET and specialist medical care, and none of them were effective, invalidating the biopsychosocial model and use of CBT and GET for ME/CFS.

The discovery that an increase in exercise tolerance did not lead to an increase in fitness means that an underlying physical problem prevented this; validates that ME/CFS is a physical disease and that none of the treatments studied addressed this issue.