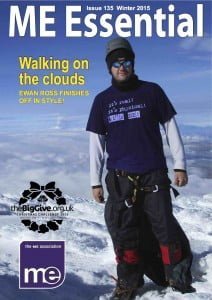 The Winter issue of our quarterly ME Essential magazine – at 48 pages, the biggest issue we’ve had for some years – is being posted out to members today. It should drop through their letterboxes with a real thump on Saturday or Monday.

Our front cover hero is Ewan Ross, from Bracknell who, with the blessing of wife Jackie who has M.E., flew to South America for a really tough MEA fundraising gig. He climbed one of Ecuador’s highest mountains after his first choice challenge, a long haul up one of the country’s volcanoes, was called off when that mountain started erupting earlier in the summer.

Inside ME Essential, we run a mixture of good, reliable standards and some really rather pleasant surprises.

We launch our annual Christmas Challenge. Too many people still have to wait far too long to have their illness diagnosed, and studies suggest that up to four in every 10 people were told after being reassessed that they didn’t have ME/CFS but some other illness. So this year we are hoping to raise £20,000 to pay for a campaign to help doctors confirm their diagnoses earlier and more accurately – with leaflets to every surgery and a medical seminar on the subject.

We publicise opportunities to become research volunteers at the UK ME/CFS Biobank in London and at Newcastle University. In both studies, the subjects will be seen in their own homes and the Newcastle researchers particularly want to winkle out severely affected people, who don’t figure much – if at all – in ME/CFS research.

Our medical adviser Dr Shepherd contributes an illness Management File on the use of the drug, duloxetine/Cymbalta, for fibromyalgic and neuropathic pain relief and then in his Ask the Doctor column answers questions on blood tests, uncooperative neurologists, when to take new symptoms to the doctor, more on neuropathic pain, vitamin B12 injections and a further note on volunteering for research. He also reports from the exciting annual scientific conference of the UK ME/CFS Research Coolaborative where they are making biomedical research waves under the leadership of Professor Stephen Holgate.

Sue Luscombe, our diet and nutrition adviser, discusses Irritable Bowel Syndrome and warns that, if you think you might have coeliac disease – an illness which presents with similar symptoms – you shouldn’t take any short cuts when you get tested.

The results from our membership survey earlier this year – when you told us what you liked and disliked about the ME Association – are reviewed by Russell Fleming. His piece is laced with loads of real quotes.

We report on a remarkable story coming out of the Norfolk and Suffolk ME/CFS service where there are plans to reinstate a consultant-led service which has a biomedical approach – and where the formal Patient Group is quietly and patiently prodding the right people behind the scenes. The recruitment ad has gone out – so watch that space! There’s also a fuller obituary for Dr Terry Mitchell than we had space for in the last issue. Terry was the service’s first consultant.

New Zealand’s Dr Rosamund Vallings has a new book out, a guide for young people. Book reviewer Tony Britton says many adults over here would also enjoy it. He did! Managing ME/CFS – A Guide for Young People, ISBN 978-1-87742-914-9. It’s on Amazon HERE

Do you remember Clare McCarthy’s piece I have M.E. and it sucks. But here’s something you need to know… when it appeared in the last issue? It attracted thousands of readers when it first appeared online our our Facebook page earlier this year. Clare has come back with more reflections on the same theme and we introduce you to ‘Emmie the Elephant’, the cartoon character which will feature in her next book.

Our dynamic fundraising manager Helen Hyland takes readers on a very personal journey in the fundraising pages – prompted by the tenth anniversary of a tragic event in the life of her and her family. And there’s a lovely piece about what her village in Scotland are doing for us this Christmas. For all sorts of reasons, Helen has been hugely grateful to have the support of her whole community behind her.

On the letters pages, there’s a Christmas competition set by Shirley Conran OBE, Britain’s very own superwoman. Shirley has put up a prize of £100, but we need your entries in before Christmas.

And finally, we’re getting very old fashioned once again. At the suggestion of Mrs J Bryan from Brecon in Powys, we’re setting up a pen pals’ club for all our members who don’t use the internet. Don’t worry – somehow, we’ll learn how to write real letters all over again.

The magazine is pictured below coming off the press at Warners (Midlands), a family-owned print firm in Bourne, South Lincolnshire, who then truck it across to mailing house DST Output in Orton Southgate, Peterborough – two companies who have given us really good service over the years. 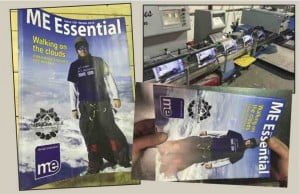