From the Huddersfield Examiner, 26 November 2015.

In this thought provoking first-person feature, 22-year-old Nathalie Wright reveals how her life has been devastated by the crippling illness ME. Nathalie grew up in Pole Moor above Slaithwaite, went to Wilberlee Primary School, Crossley Heath School in Halifax and then Greenhead College. Day and night became indistinguishable… 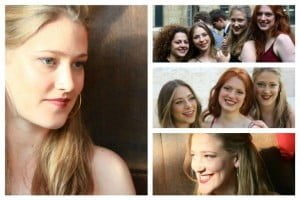 For many ME sufferers there is a date etched onto their deepest memory, the traumatic day they became ill with an often life-long disease. At my worst I suffered months of being completely bed-bound and was too weak to even clean up my own sick from the floor beside me. I only had the strength to shower every few weeks (sitting down.) I was 22.

Day and night were indistinguishable because most of the time I was not fully conscious in the way a healthy person is. I could simply pass out at any point.

When the crushing fog around my brain cleared even a little it only allowed me to be more aware of the relentless pain in my thighs and chest accompanied by a constant vice-like grip on my skull. A myriad of other symptoms danced round my body to a rhythm I couldn’t understand. Take away from this piece one fact about ME – it severely limits the patient’s capacity to function as a human being. I was reduced to a body on a bed in the prime of my life (yet in the grand scheme of ME suffering, I consider myself to have got off relatively lightly.)

My ME story began, as is very common, with a fever. I was a final year student studying English at Oxford University and was happy and fulfilled, looking forward to the future. When the fever hit I was working on some coursework and so asked for an extension as I just did not seem to be getting better. My request was denied.

The subsequent weeks were a blurred mix of confusion and helplessness as I felt myself slip further and further into the nadir of the disease. Why couldn’t I move? Why couldn’t I eat? Why could no doctors help me? You may think that with such a serious disease I would have been offered extensive medical support, but the opposite was true. Several GPs brushed me aside as being ‘a little stressed.’ When I asked another how long I could expect to be so severely ill she simply replied: “How long’s a piece of string?” Not only was I condemned to this tortuous illness, but my sentence was indefinite. I was forced to suspend my studies.

Months later when I finally got a referral to hospital (all the while languishing in a house I shared with strangers where I could barely cope to look after myself at all), I was finally officially diagnosed. “You’ll be back up and running in no time” grinned the specialist. I wanted badly to believe him but his words did not reflect reality.

As so often happens with poorly understood illnesses, attempts were made to psychologise my ME. I reluctantly saw a hospital psychologist who seemed determined to find a cause in my immediate environment. After 40 minutes of desperate floundering it seemed he’d hit the jackpot.

“Where did you go to school?” he asked. I told him, Huddersfield. Nodding sagely and narrowing his eyes he asked: “Are you having a hard time with the posh boys at Oxford?”

That was all the NHS had to offer me.

The relentless avalanche of ME symptoms completely took away my life and such a profoundly disturbing change in physical health is enough to drive anyone to despair.

Yet I think the worst consequence of such a disease is the sheer loneliness of it. I saved and treasured my scarce grains of energy to be able to have human interaction, often spending more energy on masking my symptoms and trying to appear as well as possible – I was so ashamed of my ME.

It seemed impossible to make friends and family understand exactly what was happening. Common responses included: “You’re just depressed” or even “this is just an ‘illness behaviour’ and not a real disease.”

Oxford University is often a terrible place to be sick. Determined to finish my degree I struggled on a year later under what is an enormous workload for anyone. As is usually the case at Oxford, even though I had suspended purely on medical grounds I was asked to sit nine hours of exams (including my extra time) to be ‘allowed’ back on my course. My protestations that that would make me extremely ill were all but ignored, although I managed to battle my way to just one penal exam with my tutor’s admonishment to ‘toughen up’ ringing in my ears.

I want to end this piece by saying that my ME is currently extremely life limiting, but nevertheless, I have improved a lot and am much better than thousands of severe sufferers around the world who literally can’t speak and are often ignored even when they break their backs to utter a cry of pain.

There are in-person ME support groups but it is a recurring joke in my head that people with ME are always too ill to attend them anyway – sometimes black humour gets you through a bad day. I stumbled across one such voice online which is where the ME community thrives and is an incredibly supportive environment. This voice was so ill and in such pain that it was simply asking others how best it could kill itself.

ME was my gateway to the world of the sick and often the barrier between the two worlds seems unsurmountable. How can you verbalise your body? How can the healthy understand sensations that no body should feel? This is why, when sick people speak it is of utmost importance that we are listened to, and listened to without judgement.

For ME, more biomedical research is needed urgently. In the meantime, the skills of listening and empathy are free.

I, along with millions of other sufferers around the world, want help and we want answers. Oxford University recently published follow-up data to its 2011 trial undertaken in partnership with Queen Mary and Kings College universities. The trial aimed to prove that the best treatment for ME (which they call ‘CFS/ME’) is cognitive behavioural therapy (CBT) and graded exercise therapy (GET).

However, the trial, known as the PACE trial, has been highly criticised internationally and in the UK. Dr Ronald Davis of Stanford University commented: “I’m shocked that the Lancet published it. The PACE study has so many flaws and there are so many questions you’d want to ask about it that I don’t understand how it got through any kind of peer review.”

Indeed, according to the trial’s definitions, ME patients were deemed ‘recovered’ even if they had physical function similar to someone with congestive heart failure. For me, the impact of such misleading claims not only increase the stigma I experience but is actively dangerous. GET was found to make over 70% of patients worse, according to a study conducted by the ME association.

The reason why this is so makes complete sense to any ME sufferer. The defining feature of ME is something called PEM or post exertional malaise (if one thing, ME has honed my acronym skills). This means if I exert myself physically or even mentally I will experience a worsening of all my symptoms, possibly for days or even weeks. If I walk too far at once (say 100m rather than 50m) I will feel sick and faint. Several times I have passed out in public or had to sit of the floor if a queue in a shop is too long. It’s humiliating, but I have thick skin now. I used to be a cross country runner.

The UK trial is contradicted by a landmark report made by the American Institute of Medicine this year which examined all the current evidence and came to the conclusion that ‘ME/CFS is an acquired, chronic multi-systemic disease characterised by significant relapse after physical, cognitive, or emotional exertion of any sort.’ In contrast to the PACE trial which selected patients solely on the basis that they experienced ‘fatigue’ for at least six months, the IOM report states that: ‘The disease includes immune, neurological and cognitive impairment, sleep abnormalities and autonomic dysfunction, resulting in significant functional impairment accompanied by a pathological level of fatigue.’