Jessica Taylor, founder of the ‘Share a Star’ charity, has been nominated for fundraiser of the year in the ITV ‘Pride of Britain’ Awards, ITV Meridian News reported today. 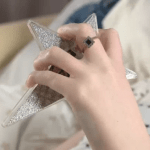 At the age of 14, Jessica Taylor was struck down with ME. It left her bedridden and confined to her room. But, with the help of her sister, Jessica launched her own fundraising charity called Share a Star to help ill children. She is now 22 and still unable to sit up; even moving from her bed to a chair requires the use of a hoist.

Share a Star aims to make children who are in hospital feel special and sends them packs of goodies to relieve boredom.

A team of runners, including Jessica’s sister, Ruby, and her brother, Tom, has run the Bupa Great South Run to raise funds for Share A Star. David Johns reports.

Click on the following link to find David Johns’ report (the film runs for about two and a half minutes):