From the Evening Chronicle, Newcastle, 1 August 2015. Story by Craig Thompson. 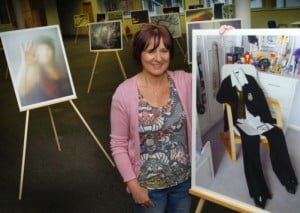 An artist whose daughter’s illness inspired a unique set of photographs has had her work exhibited at the Singapore International Photography Festival.

Sunderland University student Juliet Chenery-Robson (pictured at one of her shows) has dedicated the last 10 years to increasing the exposure of an illness which has struck very close to home.

After beginning her career as a photo-journalist, Juliet continued as a freelance writer and editor until her daughter, Emilia, developed ME at the age of 13, and she gave up work to provide full-time care.

Juliet, 52, said: “I was consumed with guilt at not being able to offer Emilia any firm answers as to why she was trapped in the land of the sick. In search of solutions I dragged her in front of a plethora of disbelieving doctors.

“I finally found direction from a local charity, ME North East, and a tangible diagnosis of ME from an understanding and empathetic consultant.

“However, giving up work to care for Emilia full-time and being unable to offer her any hope of a cure became frustrating and challenging.

“This is when I discovered what it must be like for residents of the sick world – especially for those who reside in the world of invisible illness.

“I began by exploring metaphorical substitutes for symptoms and emotions by photographing everyday objects and spaces that resonated with our lived experiences of illness.”

It was these photographs that formed the basis for her 2008 portrait series Kingdoms of the Sick, and a book of images and texts entitled Unpredictable Patterns.

In the same year Juliet received a distinction for her masters in photography, also from Sunderland.

After that the mum continued her research into ME and exhibiting photography related to the illness, until beginning her PhD in 2011 to work closer, and for longer, with ME sufferers.

Juliet said: “During the concluding stages of my thesis a part of my research was selected for exhibition in Singapore. The installation combined five portraits of ME sufferers with eyes closed, four hand with cube portraits, and four Google Earth images mapping historical ME epidemics in London, South Australia, South Africa and the USA.

“Exhibiting aspects of my work in Singapore as part of the festival was exciting and rewarding to me as an artist.

“However, more importantly, it helped raise awareness of ME beyond the UK, in a part of the world that sadly possesses even less understanding of the illness and its impact upon sufferers.”

The cause of ME is currently unknown and symptoms vary from person to person, but usually involve suffering extreme physical and mental fatigue, and an inability to recover after expending even a small amount of energy.

Tony Britton, from the ME Association, said: “Juliet’s novel approach to illustrating a largely invisible illness hits the nail right on the head – there are still far too many doctors who refuse to accept that ME is a real, neurological disease with devastating impacts for many sufferers.

“Instead of taking it seriously and demanding more research, they try to airbrush it out of existence with antidepressants and talking therapies in the hope it will disappear like a puff of smoke. For most – those who’ve been ill for years and are not getting better – it won’t.”

– It is estimated around 250,000 people in the UK have ME or Chronic Fatigue Syndrome.

– Anyone can get the condition, although it’s more common in women than men.

– It usually develops when people are in their early 20s to mid-40s. Children can also be affected, usually between the ages of 13 and 15.

– Many cases of ME are mild or moderate, but up to one in four people can have severe symptoms.

– It’s not known exactly what causes ME. Various theories have been suggested, including a viral or bacterial infection, problems with the immune system, an imbalance of hormones, and problems, such as stress and emotional trauma.

– Some people are thought to be more susceptible to the condition because of their genes, as the condition is more common in some families.